In Memory of
William David "Billy"
Salopek
1958 - 2022
Click above to light a memorial candle. 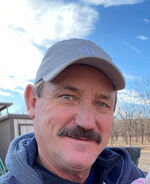 William David Salopek “Billy”, 63 years young, born to Tom Salopek and Mary Winifred Ikard on November 30, 1958. Starting with the oldest brother Dickie (Peggy with Sharla, Cade and Cole), Billy was second in line, followed by Michael (Charlene with Mac, Amy and Karajane) and then Louie (Darcy with Brennen and Brycen). The family was then blessed with two sisters, Mary Therese Arnold “MT” (Joey with Luke and Jay T) and Kathy Stout “Majka” (Barry with Maria, Annie and “Tom Bobby”). His outlaws include, Dean and Becky Jackson and Robyn Jarvis (Laurie Blanco).
Married on Friday July 13, 1991, to his soulmate Natalie, a date they chose despite superstitions, knowing they would pave their own fate. On that day, he was blessed with Jesse and Rebecca as his children. Five years later, God gifted the family with Clara Robyn. His family went on to grow by the unions of Jesse and Kristen, who brought Ryder and Colt into his life; Rebecca and Danny, who gave him Emarie, Sadie, and Natalie; and Clara and Trey, with the sixth grandchild, Sutton.
Billy earned his high school diploma in 1976 from Mayfield High School. He then attended New Mexico State University, participating as an athletic trainer and achieved an associate’s degree with his lifelong friend Joey Arnold in Ag Mechanics. His alumni pride fueled his generosity throughout his life to these institutions.
He never hesitated to donate to children’s sports, Southern New Mexico State Fair, and multiple churches and local charities. Billy was decorated by the town of Mesilla, for a selfless and courageous deed. He sat on the Board of Counselors at Citizens Bank from 2007-2010. Not to mention, the countless strangers that he touched with his constant acts of kindness. He was an incredibly hard worker with an unparalleled work ethic and always greatly valued the people that worked alongside him. His dedication and devotion to the family, friends and farm is reflected in the stories we can share and remember forever.
He was a deeply spiritual man who put his warm energy and love into everything and everyone in his life. He was an excellent snow skier, racecar driver, water sports lover, golfer, and abundantly enjoyed fishing, hunting and just being outdoors. He was a card player, pool shark and a great dance partner, as well.
Loved ones that passed before him, include his dad “Yankee”, father in law “JR”, daughter Darcie, brother in law Joey Arnold, and brother in law Blaine, along with other uncles, aunts and close friends.
pallbearers include: Jesse Haynie, Danny Maese, Trey Correa, Brycen Salopek, Brennen Jeffers, Anton Salopek, Gary Steele, and David Herman. Honorary pallbearers include: Dickie Salopek, Michael Salopek, Louie Salopek, Sam Salopek, Barry Stout, Cade Salopek, Cole Salopek, Luke Arnold, Jay T Arnold, Bobby Tom Stout, and Steve Lister.
Celebration of life, followed by reception, will be held on Monday, September 26th, at 10am at Robledo Pecan Sorting, 7445 N Valley Drive, Las Cruces, NM. Services will be officiated by Terry Adler,

To send flowers to the family or plant a tree in memory of William David "Billy" Salopek, please visit our Heartfelt Sympathies Store.