In Memory of
William "Bill"
Clark
1937 - 2022
Click above to light a memorial candle.
Memorial Candle Tribute From
Getz Funeral Home
"We are honored to provide this Book of Memories to the family."
View full message >>>
Send Flowers
Menu 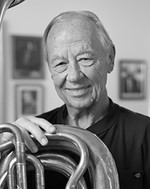 William Dempsey Clark (Bill, Doc, Dr. Clark) passed from this life on July 31, 2022, in Las Cruces, New Mexico. He was 84 years old. Bill was born December 17, 1937, in Hope, Arkansas. His parents were Ardell and Nellie Clark. He attended Prescott Arkansas Public Schools from first grade to twelfth grade. Early on Bill was an overachiever. Having spent many days during his preschool years with his mother and older sister in a one room school house where his mother taught grades one through six, he was more than prepared to enter first grade. In fact, he was allowed to skip the first grade and was placed in the second grade when he was just five years old. As a result, he graduated high school and entered Henderson State Teachers College at the ripe old age of sixteen.

Coming from a musical family, Bill’s love for music came quite naturally. His Dad played guitar and fiddle in a band when he was young. His aunt was a music educator and an accomplished pianist. Sadly, his parents did not heed his pleas to let him take piano lessons, and instead wasted good money on lessons on at least one of his sisters (Margie). He joined the high school band as a freshman and continued until his senior year. It could be that a certain majorette and flute player contributed to Bill’s interest in band.

Bill’s passion for music was more fully developed at Henderson. As a member of the “Reddie” Marching, Concert and Jazz Bands, he found his life-long love of music and music making. Upon graduation, he married the love of his life, Betty Ann Erskine. Thankfully, he had a job as the high school band director at Arkadelphia, Arkansas, During his eleven years there he completed a Masters Degree in Music at the University of Arkansas and, most importantly, became the father of two precious daughters. Bill left that position to pursue a doctorate degree in music at the University of Southern Mississippi in Hattiesburg, Mississippi, Upon completion of his degree, he became Director of Bands at Delta State University in Cleveland, Mississippi. While there, the band increased in size from about 30 to 150.

In 1985, Bill joined the New Mexico State University music faculty as Director of Bands and later served as Department Chair. During his eleven years as Department Chair, he was responsible for doubling the number of music majors to more than 200.

Never one to “sit still,” Bill set about to devise ways to involve music lovers in the expression of their talent. In 1986, he founded the Mesilla Valley Concert Band and has served as conductor and music director for the past 30+ years. During his time as conductor of the MVCB he gave over 220 free concerts to over 150,000 people. Over the years, many friendships within this group have been forged, continuing in good times and bad. In addition, Bill founded the Las Cruces New Horizon program in 1994, which at that time was one of five in the nation. This program, based on a national program founded in Rochester, New York, is for seniors who desire to resume or begin playing or singing after retirement. In 1990, Bill founded the Las Cruces All-City Middle School Honor Band. This group is selected by audition and presents a concert each year in February.

Even though his accomplishments are many and prestigious, Bill never lost his ability to treat others with respect and dignity. He used humor via his “Clarkisms” to both entertain and instruct. One of his friends wrote this about him,”The awards and accolades bestowed upon Dr. Clark are numerous, but for all of us, the charm, the wit, the intelligence, and the outright humanity that he displayed are what many remember.”

Family meant everything to Bill. He was extremely proud of his daughters, Lisa and Robin. His influence on their lives is evidenced by the fact that they both followed in his footsteps and chose a career in music education. He and Betty were blessed with a granddaughter, Ashley and grandson, Will. He and Betty opened their hearts and their home to them and relished in being able to be a part of their lives from infancy to young adulthood. Although Bill would never talk about himself or his accomplishments, he never ceased talking about them. To say he was a proud granddaddy would be an understatement. When his great grandson, Gabriel, and great granddaughter, Julianne came along, he was even prouder. (If that’s possible,) Due to the tragic loss of granddaughter Ashley, Gabriel and Julianne came to live with Bill and Betty when Gabriel was 3 years old and Julianne was 3 weeks old. For the next 7 years, great grandparents became “parents” again, with a great deal of help from Nana (Robin), Pompo (Paul), Aunt Lisa and Uncle Bob. The family endured two other painful losses, the passing of Lisa’s husband Bob, January 2021, and son Will, January 2022. Throughout these difficult times, Bill’s music community and church community were ever present with acts of kindness and love.

Bill was a member of the Las Cruces Church of Christ. He served as an elder, song leader and Bible class teacher for his congregation. During his lifetime he led singing in every congregation he and Betty attended. He shared his God-given talent willingly and happily. At every opportunity he tried to help church members deepen their worship experience through singing.

To send flowers to the family or plant a tree in memory of William "Bill" Clark, please visit our Heartfelt Sympathies Store.