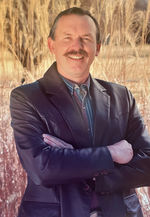 Dr. John Morton Fowler, “Doc,” passed away Friday, July 15, 2022, at the age of 71, in the comfort of his own home. Doc worked at NMSU for 39 years and was a strong advocate for natural resources and agriculture. John loved God, land, agriculture, his profession and his family!
Doc was born November 16, 1950 in Kewaunee, Wisconsin, the 3rd of 4 children, to Edith Alexander and Charles Robert Fowler. His father was a Chief Warrant Officer in the US Coast Guard, thus they moved frequently and always lived near the coast in Michigan, Wisconsin, Minnesota, Alaska, et. Because of frequent moves John always reminded his children that family is often all you have, who you can count on most, that you should stick together and always take care of each other.
As a child, John enjoyed the outdoors and loved hunting for lizards and snakes, which once he brought home to his mother inside his pocket! He liked to visit his grandparents on their family farm in Illinois. Doc’s first job was mowing lawns in 6th grade, followed by work at a pizza place, Dunkin Doughnuts and Keeler’s Horseradish Farm. Upon High School graduation John began secondary studies at Iowa State University in Chemistry but soon changed his major to Forestry. He worked summers fighting fires for the US Forest Service and was a Smoke Jumper! He continued his education, obtaining a MS in Agriculture Economics at NMSU then returned to Iowa State where he obtained his PhD. He began working as a full-time Professor for NMSU in Fall 1979.
John loved to play basketball! As a kid, he enjoyed playing during half time of a Boston Celtics/Detroit Pistons game in Carnegie Hall. He enjoyed playing for a couple hours each day during his lunch hour at NMSU until he had to have his hip replaced at the Mayo Clinic in 1990 due to an old Forest Fire injury. His nickname in basketball was FOUL-ER! He was an avid NMSU Aggie and Boston Celtic basketball fan! Doc enjoyed rebuilding an engine on his 67 Camaro, working on his farm, coaching sports with fine young people and their families. He also served as a Financial Management Leader for Young Men in scouting and church and enjoyed doing service projects on ranches. He was baptized a member of the Church of Jesus Christ of Latter-Day Saints by his son in Boston in 2015. He enjoyed serving as Sunday School President, in Priesthood Quorums, in the YSA Bishopric and until his death serving as a worker in the Albuquerque Temple. He had a strong belief in the power of prayer. His past 2 years were a God given miracle, as he was a survivor of Stage 4 Pancreatic Cancer, the Whipple surgery and was 2 years cancer free June 5, 2022.
John was passionate about his career and spent many hours working. He enjoyed research, teaching, being out on the range, and the quality men he associated with. He was passionate about all natural resources; but spent the majority of his career working with public grazing land and forest. He testified before the US Senate and House multiple times and had a reputation for being honest and true to good research! He truly respected and gave his all for the range livestock industry. He received many awards including the ALLI SIEMPRE, Bud Epper’s Handshake Award, NMFS Award, Outstanding Contribution Award from NMCG and NMFB, et. He traveled extensively; some of his favorite places being South Africa, Australia and New Zealand. He hosted the 1st International Wildlife Symposium in the United States. Doc enjoyed working with students and teaching, especially senior and graduate level college students. Doc served as Coordinator of a team of specialists known as the RANGE IMPROVEMENT TASK FORCE for 17 years and was Director of the LINEBERRY FOUNDATION at NMSU. He had many publications, including articles in the Smithsonian, Range Magazine, NM Stockman et.
While in post grad school John married and had 2 beautiful daughters, Shannyn Welsh Fowler and Amber Alexander Fowler. In 1987 John married Johnette Moore and enjoyed 4 additional children; Landon Tyrel (Courtney), Desaree, John Westin (Sarah) and Valian Chance (Molli). They resided in Las Cruces where they raised their children on a small pecan farm. John taught his children the value of working hard, the importance of a strong education and that a man was only as good as his word.
John was preceded in death by his parents. He is survived by his wife, Johnette Moore Fowler, his 6 children, 9 beautiful grandchildren and his siblings, Bonnie (Greg) Brutcher, Charles Robert ‘Chuck’, Curt (Linda) Fowler and their families. He dearly loved all his nephews and nieces in the Fowler and Moore families.
Funeral services will be held Tuesday, July 26, 2022 at 11:00 am at the LDS church, 2915 E Idaho Ave, Las Cruces NM, followed by a luncheon where many stories will be shared of his life. (Closed Casket at Doc’s request; No cemetery)

To send flowers to the family or plant a tree in memory of John Fowler, please visit our Heartfelt Sympathies Store.