In Memory of
Steven Eugene
Jones
1956 - 2022
Click above to light a memorial candle.
Memorial Candle Tribute From
Getz Funeral Home
"We are honored to provide this Book of Memories to the family."
View full message >>>
Send Flowers
Menu 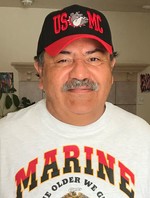 It is with great sadness to announce the passing of Steve Eugene Jones also known to his closest friends as “JR” on June 17, 2022, at the age of 66 in Las Cruces, NM with his loving family by his side.
He was born in Farmington, NM on March 12, 1956, to Angela Gonzales from Taos, NM. Steve was raised by his mother and his grandparents, Palomon and Margaret Santistevan also from Taos, NM.
Steve was very proud of his military service. He graduated from Taos High School in 1974 and soon enlisted in the United States Marine Corps on September 10, 1974. He was a Vietnam Era Veteran. In 1975, he completed his course at the Infantry Training School at Camp Pendleton, California. In the Spring of 1975, Steve was on a ship outside Cambodia when the Marines were given orders to return to Camp Pendleton to help the Vietnamese refugees with food and shelter after the fall of Saigon to communist forces. In August 1975, Steve was appointed to the Marine Barracks, Naval Station, Adak, Alaska in the Aleutian Islands. Back at Camp Pendleton, in March 1977, Steve was one of approximately 2000 Marines who underwent the rigors of simulated combat during Operation “Varsity Eagle”, on the Navy’s “Eagle of the Sea” the USS Tarawa, one of the most realistically planned and executed war games in modern Marine Corps history at that time. Steve was honorably discharged from the Marine Corps on September 9, 1977, and was transferred to the Marine Corps Reserve until May 2, 1980.
After serving his country, he attended New Mexico State University on the GI bill where he graduated and received his bachelor’s degree in Business Administration in 1983.
Steve was known to his many close friends and family as someone who loved to have a great time, party, and make people laugh with his comedic story telling. He was known to his closest friends as “the life of the party” kind of guy.
Throughout the 1980s, one of his passions was playing softball in the city leagues. He also coached his son in several youth baseball teams from 2000 to 2007.
In 1987, Steve began his career as a tile contractor/homebuilder in the Las Cruces area that lasted almost 30 years. From 1998 until 2007, his company designed and built, beautiful, custom homes behind “A” mountain.
Steve met his future wife Nora Silva in July 1982 in Las Cruces. They were both attending New Mexico State University at the time, and they married on September 19, 1987, at the Cathedral of the Immaculate Heart of Mary. They began their family in 1994 with the birth of their son, Kyle Jones and in 1997 the birth of their daughter Angelica Jones. His children meant the world to him and was extremely proud of them.
Steve is survived by his wife, Nora Jones, son Kyle Jones, and daughter Angelica Jones all from Las Cruces, NM.
Steve is also survived by his sister, Terrie Jones and brother Gerard Jones, both from Taos, NM and his brother Eric Gonzales from Albuquerque, NM.
He was preceded in death by his mother, Angela Gonzales and his grandparents, Palomon and Margaret Santistevan as well as his brother Irwin Jones and his nephew Joshua Jones all from Taos, NM.
Services will be held at Holy Cross Church, 1327 N. Miranda, Las Cruces, NM. The Rosary will begin at 6:00 pm on July 18. The Funeral Mass will be held on July 19 at 10:00 am. A reception will follow immediately at Holy Cross after the Funeral Mass.
Interment will take place in Taos, NM at the Las Cruces Cemetery at a later date.

To send flowers to the family or plant a tree in memory of Steven Eugene Jones, please visit our Heartfelt Sympathies Store.