In Memory of
John Devereaux
Herrera
1939 - 2022
Click above to light a memorial candle.
Memorial Candle Tribute From
Getz Funeral Home
"We are honored to provide this Book of Memories to the family."
View full message >>>
Send Flowers
Menu 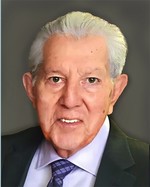 John was born February 28th, 1939, to Pete and Natividad Herrera in Tularosa, New Mexico.
After Natividad passed a few weeks after giving birth, John was adopted by relatives Sam and Isabelle Romero, who provided a loving home and good upbringing. In 1962 he married the love of his life Stella Duran and had three children.

John served in the National Guard, sold insurance for Met Life, owned Herrera’s Bail Bond and Private Investigations with his wife Stella, and worked for the District Attorney’s office as the Chief Investigator. His civic duties included being President of the Young Democratic Party, Chatterbox CB Club, Boles Acres Lions Club, The Eagles Club, and the Elks Club.

John enjoyed being outdoors, hunting, fishing, gardening, cooking, and inviting others to have a “Good cup of Coffee and a Donut” with him. His door was always open and welcoming. He also enjoyed spending time with his family and grandchildren.

Services are scheduled for June 13th, at Our Lady of The Light Catholic Church La Luz, NM, beginning at 9:00 am with Family and friends viewing, 9:30 Rosary recited by Linda Villavicencio, 10:00 am Mass by Father Montgomery with burial to immediately follow at Our Lady of The Light Cemetery. A reception will be held at Cloud-Climbing Railroad, 1093 US 82, mile marker 11 High Rolls, NM.

In lieu of flowers, donations can be sent to Mayo Clinic in Phoenix, AZ https://www.mayoclinichealthsystem.org/donate.

To send flowers to the family or plant a tree in memory of John Devereaux Herrera, please visit our Heartfelt Sympathies Store.