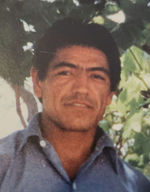 Monday, May 16, 2022. The Golden gates of Heaven opened to receive our Beloved George Z. Wilson. Age 61 of Las Cruces, NM. He was born August 23, 1960, in Las Cruces to Manuel Murphy Wilson and Petra Zertuche Wilson.
George is survived by his wife Aurora and siblings, Eva, Maria “Maggie”, Eliza, Mary Lou, Yolanda, Jessie “Chuy”, Teresa, Paul and Virginia. Brother in laws Jerry Vasquez, Lawrence Alderete, Manuel Gallegos, Juan Puentes and Danny. Sister in laws Pearl and Nancy. Stepson Joe Gonzalez, Step Grandkids Cameron, Isaiah and Jasmin, whom he loved dearly.
George was preceded in death by his parents Manuel and Petra. Brother Salvador, Sisters Eva and Celestina “Sally”, and niece Cynthia Vasquez and step niece Melissa Bachetti and Grand nephew Isaiah Vaquez and many others.
George was known as a hard worker. There was never a job or task to big that he couldn’t accomplish. He was a Jack of all Trades. George also loved to draw. He drew classic cars/trucks and cartoon characters on handkerchiefs. Many people knew him as he used to drive around town showing off his classic Blue 1965 Chevy Truck. He was also known for his comical sense of humor, being a jokester, to his family and friends. Prior to his passing he gained courage and strength and renewed his relationship with our Lord and found everlasting peace.
Celebration of Life is Wednesday June 8th, 2022, at Getz from 5pm-7pm with public viewing followed by prayer service. Funeral is Thursday, June 9th, 2022 at 10am, also at Getz followed by burial at Hillcrest Memorial Garden. Officiating at the funeral service will be Pastor Adam Cantue.
Pallbearers will be Angel Wilson, Isaac Gallegos, Jett Paul Wilson, Storm Wilson Jones, Hugo Rodriguez, and Joe Gonzalez. Honorary Pallbearers Paul and Jessie Wilson.
A special Thanks goes to his wife Aurora who fueled George’s courage and strength till he was prepared to “Go Home” The unconditional Love between them will never part as it was bonded by hand at his passing. Thanks also go to all Family, Friends, Getz staff and others who have helped and stood by George's side. He will be greatly missed by his family and friends.
Bless are they that mourn, for they shall be comforted.
Mathew 5:4

To send flowers to the family or plant a tree in memory of George Z Wilson, please visit our Heartfelt Sympathies Store.