In Memory of
Jaime de Jesus
Lujan
1986 - 2022
Click above to light a memorial candle.
Memorial Candle Tribute From
Getz Funeral Home
"We are honored to provide this Book of Memories to the family."
View full message >>>
Send Flowers
Menu 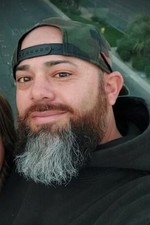 JJaime De Jesus Lujan “JJ”-36
Born January 12, 1986, to James and Matilda Lujan in Las Cruces, NM.
It is with great sadness that we come together for the sudden passing of our bravest “Jay” on May 6, 2022, in Las Cruces, NM.
Jaime had one sister, Deanne. They were two peas in a pod, inseparable. He married his high school sweetheart Yllana, the love of his life. Together, they created two beautiful boys, Jaymes and Noah who adored him.
He began his service to the Marine Corps in 2004, where he completed active duty and one tour in Iraq, as well as two years reserves.
He always provided wisdom and guidance, especially to his nephew Jacob whom he loved just as much as his own sons.
Jaime completed his bachelor’s degree in ICT and was currently employed at WSMR where he led his team as a software safety analyst. He was recently awarded by his company with the Innovation Sapphire Award.
He was loved by many friends, co-workers, Marines, and all who knew him. He was definitely the life of the party, no one ever felt left out. He had endless stories, loved comedy and was quite the jokester himself. He was so full of life and was a free spirit, being on his motorcycle is when he felt most at peace. He was a person you could tell your biggest secret to and wouldn’t tell a soul. Jaime was a diehard Aggie basketball fan and never missed a game.
He is survived by his beautiful wife and children, mother, sister, in-laws Richard and Dorothy, and many more family members.
He was preceded in death by his father, James Lujan.
A graveside service is scheduled at 10:00 am on Wednesday, May 18, 2022, at Hillcrest Memorial Gardens.

To send flowers to the family or plant a tree in memory of Jaime de Jesus Lujan, please visit our Heartfelt Sympathies Store.