In Memory of
James
Gose Sr.
1927 - 2022
Click above to light a memorial candle.
Memorial Candle Tribute From
Getz Funeral Home
"We are honored to provide this Book of Memories to the family."
View full message >>>
Send Flowers
Menu 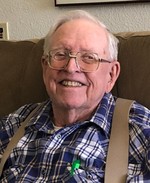 James (Jim) B. Gose died on April 29, 2022, at Morningside Assisted Living Facility in Las Cruces, NM, surrounded by his loving family. He was born on May 2, 1927, in San Diego, CA to Elliott and Eleanor (Paulding) Gose. Growing up in a military family, Jim lived all over the United States, including Hawaii and Puerto Rico. He frequently reminisced of his time as a child in Ft. Huachuca, AZ, where he spent several years as the batboy for the fort’s baseball team, which his father, "Colonel Gose”, coached. As a senior in high school, he went on to become one of two starting pitchers for the Albuquerque High School’s state championship team. Jim was drafted and served time in the United States Army in 1945. Subsequently, he settled in Las Cruces, NM in 1948, marrying local girl, Aileen Holder, on July 15, 1949, at St. Genevieve’s Catholic Church. Jim and Aileen were married for 59 years until her death in 2008. Together they attended St. Genevieve’s, the Basilica of San Albino and the Cathedral of the Immaculate Heart of Mary for all the decades of their marriage. Jim and Aileen opened the first crisis pregnancy center in Las Cruces in 1973 and worked until the end of their lives for the benefit of the unborn and their mothers. They also volunteered in many ministries for the church and diocese.
Jim graduated from New Mexico A&M (NMSU) in 1951 with a bachelor’s degree in Mathematics. He worked at White Sands Missile Range (WSMR) as a mathematician and supervisory general engineer. He worked in the Data Reduction Division, Data Analysis Directorate, and Quality Assurance Office, where he was Chief of Technical Services Division, writing many Range operation documents that are still in use to this day. Jim’s work at WSMR included analysis and support for the Apollo Space Program. He retired in 1979 after 28 years, and then worked at the Physical Science Laboratory (NMSU) until 1988. Meanwhile, in 1974, he and Aileen began to convert the family cotton farm into pecan orchards, which eventually swelled to 127 acres of highly productive orchards.
His legacy is carried on by his 7 children, 27 grandchildren, 51 great grandchildren, and 2 great-great grandchildren. Jim was preceded in death by his wife Aileen; grandsons, Adam Gose and Sammy Avitia; and one brother, Elliott B. Gose Jr. He is survived by his siblings David Gose and Eleanor Wootten; sons, James B. Gose, Jr. (Daphne), Patrick Gose (Michelle), and John Gose (Rosa); daughters, Christine Pabst (Charles), Mary Zemites (Thomas), Anne Smith (Kerry), and Lynne Avitia (Florencio).
The family would like to thank the staff, nurses, and administrators of Morningside Assisted Living Facility for their support and care of their father since 2016. He also received tender and loving assistance from the saintly caregivers of Help at Home II, right up to his last hour. Living with dementia for many years never stopped Jim from saying, “God bless you!” to every person who crossed his path. He will be forever remembered for this small act of kindness.
A public viewing and Rosary will be held at 7:00 PM, Monday, June 6, at Getz Funeral Home, 1410 E. Bowman Avenue, Las Cruces, NM. The Funeral Mass will be celebrated at 10:30 AM, on Tuesday, June 7, at The Cathedral of the Immaculate Heart of Mary, 1240 S. Espina, Las Cruces, NM.
In lieu of flowers, the family prefers donations to be made in Jim’s name to Turning Point of Las Cruces. Please visit www.pregnancylascruces.com if you would like to contribute.

To send flowers to the family or plant a tree in memory of James Gose Sr., please visit our Heartfelt Sympathies Store.