In Memory of
Fern Unona   Marie
King
1931 - 2022
Click above to light a memorial candle.
Memorial Candle Tribute From
Getz Funeral Home
"We are honored to provide this Book of Memories to the family."
View full message >>>
Send Flowers
Menu 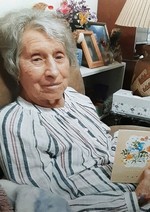 To send flowers to the family or plant a tree in memory of Fern Unona Marie King, please visit our Heartfelt Sympathies Store.