In Memory of
Deborah Kay
Phillips (Alexander)
1950 - 2022
Click above to light a memorial candle.
Memorial Candle Tribute From
Getz Funeral Home
"We are honored to provide this Book of Memories to the family."
View full message >>>
Send Flowers
Menu 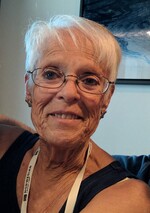 Deborah Phillips, daughter of A.D. and Mary Alexander, passed away on November 14, 2022, surrounded by the love of her husband and kids.
As on of seven children to A.D and Mary, Deborah (or Debbie as she was known to many) was born on July 4, 1950, in Carlsbad, NM. At the age of two months, the Alexander family relocated to Las Cruces, where five generations past called home.
Debbie attended Central Elementary, Holy Cross, Alameda Junior High and graduated from Mayfield High School in 1968. With her happy attitude, kindness, and willingness to help others, Debbie made lifelong friends during these times.
While in College at New Mexico State University, Debbie rekindled a friendship from her childhood, with John Phillips III. It was during this time, their friendship blossomed to romance, leading to marriage of the two in November 1970. After marrying, they were blessed with two children, Duane, and Crystal.
After college, Debbie had the amazing opportunity to work in the Las Cruces office for Governor Bruce King, leading to her involvement with the Republican Party of New Mexico. During her involvement, Debbie became a District Delegate, alongside John and often worked at the election polls.
Debbie was always a hands-on Mom to Duane and Crystal. She could often be found at a PTA meeting, a sporting event of some sort, or at home playing a game of Uno or Scrabble with them when they were home sick. A day never passed where her love wasn’t felt or shown to her family, and that will be incredibly missed.
As the kids grew, friends were made in the family social circles, where a sister like bond was formed within the group. Vicki, Elizabeth, and Connie were truly Debbie’s best friends. From weekly breaks away to Sonic for a Rt. 44, evening coffee and pie at Village Inn, girls-trips up to the lake or monthly Scrabble nights, they shared twenty-plus years of laughs, tears, and love. Up until her final days, these women didn’t just help Debbie, but they offered unwavering support and strength to John, Duane and Crystal.

Her dedication to raising her family and being a devoted spouse, were all the accolades she could ask for. Her life was filled with love, adventure, and experiences that she was able to share with her family and friends. Debbie could often be found doing her gardening, or if the mood struck, at the casino with John. While Debbie didn’t travel as much as she would’ve liked, she always found her way to the ocean, where she could enjoy the peace and tranquility.
Debbie is preceded in life by her parents A.D. and Mary Alexander, sister Tancy Bird, brothers Andrew and Greg Alexander, and many extended family members. She is survived by her devoted husband, John Phillips of Las Cruces, her son & daughter in-law Duane & Nickee Phillips of Tucson, and her daughter & son in-law, Crystal and Phil Wilmot of Phoenix.

No services will be held at her request, and her ashes will be spread far and wide by her family at a later date.
In the words of Debs: I came, I did, I left, with a smile on my face.

To send flowers to the family or plant a tree in memory of Deborah Kay Phillips (Alexander), please visit our Heartfelt Sympathies Store.