In Memory of
Robert Martin "Robin"
Hastings
1954 - 2021
Click above to light a memorial candle. 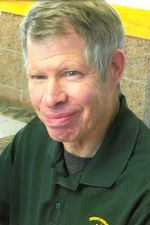 Robert Martin Hastings – Obituary
It is with great sorrow that we announce the passing of Robert “Robin” Martin Hastings from this life to eternal life in the presence of his loving wife and daughter on September 6, 2021, at Mountain View Regional Medical Center in Las Cruces. For twelve months Robin courageously battled a neuroendocrine carcinoma of the pancreas.
Robin Hastings was born on February 9, 1954, in Richmond, VA to parents William and Patricia (Granger) Hastings. He grew up in Los Angeles and graduated from Chatsworth High School in 1972, and attended USC on a gymnastics scholarship, majoring in astronomy. Following graduation, Robin crossed the country on his bicycle. In 1977 he enrolled in graduate school at NMSU and went on to earn a Master’s degree in Mechanical Engineering in 1987.
During his career he worked at JPL on the Voyager Project and became a computer programmer. Some of the projects he worked on included NASA’s TDRSS Project, military simulations, and HELSTAF. His last full-time position was at NMSU’s Physical Science Lab.
Upon retirement, Robin found the true love of his life as a part-time instructor of astronomy at Dona Ana Community College. He exceled at helping students acquire an appreciation for science and the immense wonder of the night sky. His avocations included hang gliding, coaching gymnastics at Gym Magic, writing songs and recording 3 original CD’s, and bowhunting, He was a member of the Rio Grande Soaring Association, Los Chismosos Toastmasters, and Morning Star United Methodist Church. Robin greatly valued his friendships and the joy they brought him.
Robin is survived by his wife of 34 years, Nancy (Peters) Hastings, and daughter Keighley Tenaya Hastings as well as two brothers and a sister: David Hastings (wife Debbie) of Brush Prairie, WA, ; Tim Hastings (wife Laurel) of Las Vegas, NV; and Dianne Hastings (Michael Rodriguez) of Santa Fe in addition to beloved nieces Lauren Rodriguez-Hastings and Patti Hastings, nephews William Hastings, George Hastings, Timothy Hastings, Jr., and Jake Hastings; cousins Geoff Hastings, Rada Hastings, and Judy Singer, and an uncle, George Sands Hastings.
He was preceded in death by his parents William and Patricia Hastings, his aunt Beatrice Granger, his brother Tom Hastings, cousin Douglas Hastings, nieces Breanna and Amber, and grand-niece Madison Hastings.
A celebration of Robin’s life will take place on September 25th at 2 p.m. at Morning Star United Methodist Church in Las Cruces. A second memorial service will be held at the DeWitt Methodist Church in DeWitt, NE on October 9th at 2 p.m. Robin’s cremains will be interred in Oak Grove Cemetery in DeWitt in the Peters family plot.
Memorial gifts may go to Morning Star United Methodist Church in Las Cruces or to the DeWitt Historical Society, 15124 North Blue Ridge Drive, DeWitt, NE 68341.

To send flowers to the family or plant a tree in memory of Robert Martin "Robin" Hastings, please visit our Heartfelt Sympathies Store.