In Memory of
George
Baker
1930 - 2021
Click above to light a memorial candle.
Memorial Candle Tribute From
Getz Funeral Home
"We are honored to provide this Book of Memories to the family."
View full message >>>
Send Flowers
Menu 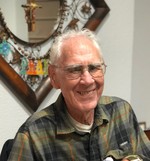 On June 2, 2021 George Baker entered enteral life at the age of 91. He was born in Rochester Hills, MI to Alexander and Annie Baker. After graduating high school George served in the United States Army during the Korean War and was honorably discharged in 1952. Subsequently he moved to Las Cruces in 1953 and graduated from New Mexico College of Agriculture and Mechanic Arts in 1957. George went on to work for the Physical Science Laboratory at New Mexico State University for 29 years. While working in Las Cruces he met and married Joan Rooker, his wife of 53 years. They had two children Frances and Brett Baker, who he is survived by. George was healthy and active for the majority of his life. During retirement he spent countless hours working in his shop repairing a number of different machines or automobiles for people he knew or just for challenge. George enjoyed hunting with various family members throughout his life. George traveled with the Southwest Honor Flight in 2012 to Washington D.C. visiting the military memorials. He became a supporter for future Honor Flights.

He is survived by his children and their spouses Frances & Leonard Bloom and Brett & Jamie Baker. He will be remembered by grandchildren Michelle Bloom, Caley Morales, Emit Brooks and Madison Baker; great-grandchildren Alexandra Bloom, Cameryn, Ashlynn & Tristan Morales, and Emma Brooks; in-laws Roma Powell, Mary & Darwin Rooker, Louie Morales and Tony Campos along with countless other family and friends who were blessed to know him.

A viewing will be held on June 10, 2021 at 10:00 AM followed by a private family burial at Fort Bayard National Cemetery. Pallbearers will be Brett Baker, Ken Mosher, Leonard Bloom, Louie Morales, David Powell & Jared Peterson.

The family would like to thank Dr. John Glick, Dr. Craig Cannon, and Dr. Richard Ross for their care of George. The family encourages donations in lieu of flowers, to be made in George’s name to either the Honor Flight of Southern New Mexico or Mesilla Valley Hospice.

To send flowers to the family or plant a tree in memory of George Baker, please visit our Heartfelt Sympathies Store.