In Memory of
Wayne Earl
Stevenson
1943 - 2021
Click above to light a memorial candle.
Memorial Candle Tribute From
Getz Funeral Home
"We are honored to provide this Book of Memories to the family."
View full message >>>
Send Flowers
Menu 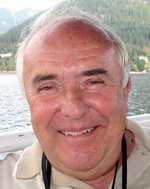 Wayne was born 24 April 1943, to Dorothy and Earl Stevenson in St. Thomas, Ontario. He attended The University of Waterloo attaining a degree in Psychology, Human Factors.

Wayne was a pilot and flight instructor. He flew a everything from Piper Cubs to commercial transport aircraft. He was long a committed member of the local Chapter 555 of the Experimental Aircraft Association and was known for both his precision in pouring pancakes at the monthly fly-in breakfasts, as well as his explanation to his customers that the blueberries in the pancakes were frozen because that was how they grew them in Canada. Wayne also taught in the engineering department at New Mexico State University and had an interest in - and broad knowledge of - everything mechanical.

Wayne and Julie divided their time between Las Cruces and Sidney, British Columbia, where they enjoyed exploring the waterways around Vancouver Island in their 45-foot boat “Toucan”.

Wayne is preceded in death by his wife Mary Jane (Carpenter) Stevenson. He is survived by his wife Julie Marineau, and his three daughters Elizabeth (Patrick), Jennifer (Wally), and Margaret (Charlot) and 5 grandsons.

In lieu of flowers, you may make a donation to the Experimental Aircraft Association’s Young Eagles Program.

To send flowers to the family or plant a tree in memory of Wayne Earl Stevenson, please visit our Heartfelt Sympathies Store.