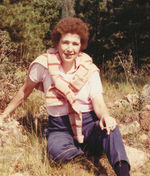 Patricia Agnes (Symalla) Lofgren was taken into the arms of God on April 24, 2021. Born on January 29, 1935 to Ralph Vincent Symalla Sr. and Bernice Mazurkiewicz. Her mother passed away when she was a baby and she was raised by her father and stepmother Elinor. She was known by many names, Pat, Patsy, Mom, Aunt Pat, and her favorite, Grandma. Family was the beat in her heart. In 1956 she graduated from Patrick Henry High School. Her high school years included lots of dancing and going to Bass Lake. She was proud to have worked many years as a young lady at Shell Oil Company. It was during this time that she met the love of her life, Robert Lofgren. They married on May 19, 1956 and shared 65 years of life and love together. When they welcomed into their family son Robert in 1964 and daughter Michielle in 1966 she became a stay-at-home mom. They moved to Evergreen, Colorado in 1970 to raise their family. She enjoyed weekends on the ski slopes in the winter and hiking the mountains in the summer. Yearly car rides were a must to see the changing colors of the Aspen trees. As her love of dancing continued, they joined a square-dancing club with her sister and brother-in-law. Being handy with a sewing machine she enjoyed making her own dresses and petticoats. She was also quite skilled with crochet hooks and knitting needles. Visiting family was very important, traveling often to Minnesota to enjoy yearly summer vacations. Her flower garden in Evergreen was a labor of love, she always had a green thumb. After 25 years retirement brought them to Las Cruces, New Mexico. She loved being a Grandma, she even became a “bonus” grandma to many over the years. Recently you could find her doing her word search puzzles on her favorite spot on the couch, always ready with a smile. Pat was a spunky, feisty, ball of fire and she will be greatly missed by all who knew her.
She was preceded in death by her parents Ralph Symalla Sr., Bernice Symalla and Elinor Symalla, brother Ralph Symalla Jr., and sister Audrey Lawson. She is survived by her loving husband Robert G. Lofgren, children Robert O. Lofgren and Michielle Read, grandchildren Ashley Burns, Megan Read, Mandy Read and Luci Live, brothers Robert Symalla, Austin Symalla, Dennis Symalla, sister Jackie Tiner and many nieces and nephews.