In Memory of
James J "Pete"
Drexler
1938 - 2021
Click above to light a memorial candle.
Memorial Candle Tribute From
Getz Funeral Home
"We are honored to provide this Book of Memories to the family."
View full message >>>
Send Flowers
Menu 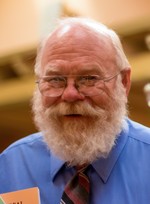 James Joseph Drexler, known to the world as “Pete,” passed away on April 22, 2021 at home, surrounded by love from his eight children who were there with him.

Pete was born on April 19, 1938 in Miami, Florida to Earl Joseph Drexler and Elizabeth Grolig. They found their way to Clyde, Texas, where Pete honed his academic skills in middle school, becoming valedictorian. The family then moved to Lovington, New Mexico where Pete graduated from Lovington High School with the highest grades of his class. During his high school years, he was also an athlete--winning the first mile race on the Lovington track.

Aided by a scholarship and a great summer job, Pete became the first in his family to attend college, the first to get a bachelor’s degree, and the first to get a master’s degree. As a student at New Mexico State University, he met and married Elizabeth Riker. They had eight children who survive him: Kateri Drexler (Tom Jay); Will Drexler; Regina Drexler; Jane Drexler; Kristi Drexler; Tim Drexler (Lidia Drexler-Valdez); Matthew Drexler (Teresa); and Paul Drexler. As a result of his example and with his support, all of his children went to college and most have advanced degrees. He is also survived by 7 exceptional grandchildren: Kaitlin Brohman; Lukas Drexler-Bruce; Nickolas Drexler-Bruce; Ryan Drexler-Valdez, Matthew Tyler Drexler, Max Drexler-Valdez, and Ainsley Drexler.

As a scientist, fueled by his passion for physics, Pete treasured his hands-on work at White Sands Missile Range, much more so than his previous corporate life. He excelled in his field as a physicist and was part of the small team that worked on optical instrumentation, including the Atmospheric Turbulence Observation and Measurement (ATMOS) system profiling the atmospheres over White Sands, Apache Point, Kirkland Air Base, Colorado, Indiana, Hawaii, Kit Peak in Arizona, and Stuttgart, Germany to determine the effect of turbulence on telescopes in order to stabilize images received.

After retirement from his profession as a physicist, Pete went on to become an award-winning writer of historical non-fiction books, which required a tremendous amount of research and fueled his passion for the untold history of the southwest. Among other things, he researched and deduced Coronado’s debated route through the southwest, traced Cabeza de Vaca’s harrowing journey from Florida to Mexico, and condensed the history of Dona Ana county.

Those who knew Pete know for certain that he was much more than a tremendous father to his children, and he was greater than his passion for physics and local history. Pete was the rarest form of kindness. He was good-natured and happy every single day. Pete always made every person with whom he interacted feel accepted and valued. It did not matter that Pete was often the smartest and wisest in any room. He was humble, patient and genuinely interested in the experiences of all he encountered.

In lieu of flowers and other recognitions, Pete requested donations be provided in his honor to the James J. “Pete” Drexler Scholarship Fund at https://www.jamesjdrexlerscholarship.com/get-involved-1 to help give students the opportunity of education that was given to him.

To send flowers to the family or plant a tree in memory of James J "Pete" Drexler, please visit our Heartfelt Sympathies Store.