In Memory of
Chester David
Fuller
1936 - 2021
Click above to light a memorial candle.
Memorial Candle Tribute From
Getz Funeral Home
"We are honored to provide this Book of Memories to the family."
View full message >>>
Send Flowers
Menu 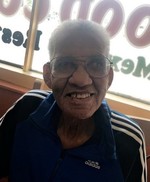 God looked down into his garden and picked another flower known on this earth as Chester David Fuller. He flourished on this earth for 84 years and transitioned to a brighter garden on Thursday, April 1, 2021.

He was the first flower to bloom on December 1, 1936 from Sammie David Fuller and Barbara Allen Conley in Vado, New Mexico. Three more flowers bloomed from this union.

His garden started to grow spiritually when he was baptized at an early age at Valley Grove Baptist Church in Vado, NM, where he served faithfully and continued growing when he later joined Bethel Second Baptist Church, Las Cruces, NM.

He yielded many accomplishments on his journey. While at Gadsden High School he was a varsity football player and received a scholarship to Trinidad Junior College in Trinidad, CO. He also attended New Mexico State University in Las Cruces, NM. After college he served in the U.S. Army. Upon his return from the Army, he planted his roots at Prudential Insurance Agency known as, “A Piece of the Rock”, as he would say. He grew with the company and was the top sales insurance agent for many years.

He joins the garden on the other side with his brother Robert Lee Fuller, sister Vera Walls, sister Effie Marie and parents. He leaves his garden to be tended to by, his sister Bobbie J. Boyer, children and a host of other relatives and friends.

A public viewing is scheduled for 10:30 AM – 11:30 AM Monday, April 12, 2021 at Getz Funeral Home Chapel. A funeral service will follow the visitation at 11:30 AM. Burial will follow funeral services at the Vado cemetery in Vado, NM. Covid-19 guidelines will be followed. Capacity inside the funeral home will be limited to ten (10) people at a time.

To send flowers to the family or plant a tree in memory of Chester David Fuller, please visit our Heartfelt Sympathies Store.