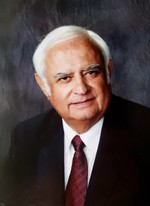 José Alba “Buddy” Viramontes passed peacefully on March 25, 2021, in Las Cruces, New Mexico. He had just turned 78 years old in January. Buddy is survived by his loving wife, Sally, his two sons, Jos and Marco, daughter-in-law Shawn Werner, his grandson, Simon, and several brothers, sisters, nephews and nieces. He was a life-long resident of the Mesilla Valley, where he was known and beloved by all who knew him.

Buddy was born in January of 1943 in Las Cruces, New Mexico, to Jose E. “Conke” and Maria Luisa Alba Viramontes. He was the second eldest of fourteen children and was the eldest son. Buddy graduated from Las Cruces High School in 1961, where he was active in Future Farmers of America, reflecting his love of agriculture and foreshadowing his long and distinguished career in the field. He began his studies at New Mexico State University before he was drafted, electing to join the United States Air Force on July 5, 1968. While on leave in Las Cruces, he met and fell in love with his first wife, Teresa Guaderrama. Buddy served his country for almost five years as a communications specialist, including two years in Naples, Italy. Buddy loved his time in Italy, learning to speak the language fluently, and rejoicing in the birth of his first son, whom his Italian friends gave the name Joselito. Buddy was honorably discharged with the rank of Staff Sergeant on May 2, 1973. He and Teresa returned to Las Cruces, where Buddy completed his degree in Agriculture at NMSU and later welcomed their second son, Marco, into the world.

Buddy had a love and passion for agriculture, and he was highly regarded for his expertise in crop management. He spent his entire career counseling and working with farmers throughout the Southwest, and especially in the Mesilla Valley, helping them with his expert knowledge of pest control, weed abatement and crop yield maximization. He began his career with Shell Chemical Company, then worked for many years with Dupont Chemical. After his formal retirement from Dupont, Buddy continued working as a self-employed crop management consultant through his own company, Ag Market Resources. Buddy’s expertise was well-known and highly regarded. In 2007, he was awarded the prestigious Fabian Garcia Founder’s Award by the NMSU College of Agriculture “in recognition of outstanding leadership in support of the land-grant mission in the spirit of the pioneers of NMSU.” In 2014 he was again recognized by NMSU with the Philip J. Leyndecker Agriculturalist of Distinction Award for “Outstanding Leadership and Meritorious Service in New Mexico’s Agriculture.”

Buddy was a highly creative person with strong engineering skills. He loved working with his hands and used his talents to create innovative farm equipment used by farmers throughout the country and in Mexico. He received his first patent from the U.S. Patent Office in 1969 and thereafter created several additional pieces of equipment to help harvest crops, irrigate, and apply fertilizers and chemicals. Few things gave Buddy as much joy as working in his shop, especially when he could be accompanied by his sons, with whom he shared his love of welding.

Beyond his professional achievements, Buddy was known as a caring and loving person, generously giving to his family, his church, and to all he came across in need. He was a devout Catholic and devotee of the Sacred Heart of Jesus. He would always greet his friends with a laugh (and sometimes an inappropriate joke!). His manners, learned from his parents and passed to his children, remained impeccable until his last day.

Above all else, Buddy was a devoted son, an adoring husband, and a loving father and grandfather. Later in life he met and married his wife Sally, whom he adored and cherished. He would often say his twelve years with Sally were among the very best and happiest days of his life. He was immensely proud of his sons, and his happiest moments were spent with them and above all with his seven-year-old grandson, Simon, who called him “Pipa.” Buddy was a father figure to some of his younger siblings, to many of his nephews and nieces, and to many of his children’s friends who looked up to Buddy and could always count on his love and encouragement. Buddy was preceded in death by his parents, his beloved sister, Mary Agnes Camuñez, and his brothers Jaime, J. Ron, and Juan Leo Viramontes. He is survived by nine brothers and sisters.

Rosary and Funeral Services will be held at St. Genevieve’s Church in Las Cruces on Friday, April 16th. The Rosary begins at 10:30 a.m. and the mass starts at 11:00, followed by the interment of the ashes shortly thereafter. Unfortunately, due to COVID 19 there will be no formal gathering after the services.

The family kindly requests that in lieu of flowers, donations be made to St. Genevieve’s Church or the American Heart Association.