In Memory of
Helen Louise
DeMarco (Richie)
1915 - 2021
Click above to light a memorial candle. 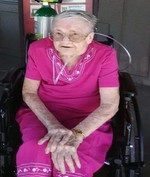 Helen Louise Ritchie DeMarco was born on December 15, 1915 to Harley and Juanita Ritchie in Fort Smith, Arkansas. She passed away peacefully in her sleep on March 13, 2021. She had two brothers, Parker and Robert Calhoun (RC), both preceding her in death. She is preceded in death by her husband, Joe DeMarco, her three sons, Billy Joe, a causality of the Vietnam war (KIA), Jimmy W., and Charles D. (Buddy), and her grandson Leonard (Lenny) E. Wilcox. She is survived by her daughter, Suzanne, at the home address, her six grandchildren, Lorrietta, Larry, Sabrina, Clinton, Steven, and Dyanna, and several great- and great-great-grandchildren. She was saved and baptized at the First Baptist Church of Haskell, Oklahoma in 1924. She moved to Las Cruces in December of 1953. She first attended Grand View Baptist Church, now Calvary Baptist Church. She joined the First Baptist Church of Las Cruces after moving to her current home at 164 W. Willoughby Ave., by letter from the First Baptist Church of Paris, Arkansas. Graveside service will be held Thursday, March 18 at 10:00 A.M. at the Masonic Cemetery in Las Cruces NM In lieu of flowers, she would like donations to be given to the Building Fund or the Baptist Children’s Home.

To send flowers to the family or plant a tree in memory of Helen Louise DeMarco (Richie), please visit our Heartfelt Sympathies Store.