In Memory of
Carlos
Amezquita
1929 - 2021
Click above to light a memorial candle.
Memorial Candle Tribute From
Getz Funeral Home
"We are honored to provide this Book of Memories to the family."
View full message >>>
Send Flowers
Menu 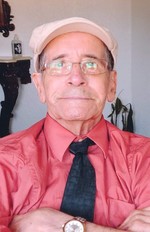 Carlos Chávez Amézquita - Las Cruces, NM
It is with great sadness that we announce the passing of our beloved husband, father, grandfather, great-grandfather, great great-grandfather, brother, uncle, and friend. Carlos was born in El Paso, TX on December 10th, 1929 to Mercedes C. and Pablo M. Amézquita and was called home to Heaven at the age of 91 on Wednesday, February 24th, 2021 in Las Cruces, NM.
Carlos lived life to the fullest and had many chapters. At the age of 14, he and his brothers took over the family shoe repair business, The Electric Shoe Shop (which was later renamed the Amézquita Brothers Shoe Repair), after their father’s passing. He then joined the U.S. Army in the early 1950’s and was an extremely proud veteran that often spoke about his time stationed in Mannheim & Wiesbaden, Germany. While in Germany, he was in the 2nd Armored Division and assigned to an M26 Pershing armored tank. He also became fluent in the German language while he was deployed and, throughout his life, would speak German to anyone who would listen. He was known to be an accomplished craftsman in woodworking and created masterpieces with his gifted mind and skills. He was employed as a site foreman for numerous construction companies in Las Cruces that included projects at NMSU, White Sands Missile Range, NASA, and the State of NM government. However, his greatest accomplishment and pride by far, was the beautiful life and legacy he created for his loving family.
He is survived by his beautiful and loving wife of 67 years, Aurora Diaz Amézquita, son Charlie D. Amézquita of Las Cruces, NM, daughter Cindy R. Martinez of Mesilla Park, NM, and son Eric P. Amézquita of San Diego, CA. He is also survived by seven grandchildren, Dawnmarie Martinez, Danny Gil, Charlie Amézquita III, Michael Gil, Yvonne Abraham, Gabriel Gil and Adriana Martinez, by ten great-grandchildren, Delilah Gil, Ryne Martinez, Angelique Gil, Eric Martinez, Marae Martinez, Brian Abraham, Olivia Amézquita, Brandon Abraham, Brayden Abraham, Vivian Amézquita, and one great great-grandchild Atreyu Vargas. He is also survived by a brother Reynaldo C. Amézquita, sister Maria Elena Green, uncle George Chávez, and numerous nieces, nephews, and cousins. He is predeceased by his father Pablo M. Amézquita, mother Mercedes Chávez Benavidez, his stepfather Nicanor J. Benavidez, infant grandson Adrian Gil, brother Gilbert C. Amézquita, brother Alfredo C. Amézquita, sister Alicia Rios, as well as numerous nieces, nephews, aunts & uncles.
The Amézquita family would like to thank Benjamin Giron and the kindhearted, compassionate, and attentive staff of the Melendres Home in Las Cruces, NM, where his caregivers (Leticia, Manny, Silvia, Lulu, Grace & Adan) provided him with companionship and nurturing care where he was also loved. A special thanks to his doctors, Dr. Leon and Dr. Kamali for their exceptional care, and our greatest gratitude to the Veteran’s Administration; specifically, Jackie Sierra, RN, Benjamin Eakes, Dr. Ohalete, and Dr. James Cruise with the VA caregiver support group. We are also forever grateful to many others, including family and friends, who offered their support and love during Carlos’ journey.
Cremation has taken place, however, due to the ongoing COVID-19 pandemic, the family has decided to postpone funeral services for a later date once restrictions have been lifted.
Arrangements by Getz Funeral Home 1410 E. Bowman Ave. Las Cruces, NM 88001. Please visit www.getzcares.com to sign the local online guest book.

To send flowers to the family or plant a tree in memory of Carlos Amezquita, please visit our Heartfelt Sympathies Store.