In Memory of
Herbert
Zuhl
1923 - 2021
Click above to light a memorial candle.
Memorial Candle Tribute From
Getz Funeral Home
"We are honored to provide this Book of Memories to the family."
View full message >>>
Send Flowers
Menu 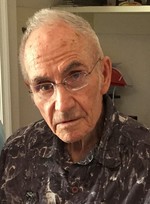 Herbert A. Zuhl of Las Cruces, New Mexico, passed away February 12, at the age of 97. He was born June 25, 1923 in Walkerville, Michigan and graduated from high school in Hart, Michigan. He received his B. S. in Chemistry from Michigan State University in 1948. His post graduate studies included the University of Minnesota School of Business, The New York School of Commerce, and the Alexander Hamilton Institute of New York.
Herbert was an officer in the Navy serving in the Pacific during WWII. He completed courses in military sciences at Alma College in Michigan and Columbia University in New York. His employment included DuPont Company in Wilmington Delaware, Titanic Metals Corporation of New York, Steward Chemicals of Mason City, IA, and Dow Chemical Company servicing the Midwest agricultural markets.
Herbert married Joan Russell in 1968. Herbert was a pioneer in digging and polishing large slabs of petrified wood. Together, Herbert and Joan, built a successful petrified wood business. The couple established a Manhattan showroom for their treasures and sold to collectors and interior designers around the world. After many years they sold their business and decided to settle in Las Cruces. Herbert and Joan donated their personal collection of over a thousand pieces of petrified wood, fossils, and minerals to the New Mexico State University. In conjunction with the New Mexico State University and sponsored by the Zuhls, the “Zuhl Museum: Home of the Zuhl Collection” was built to display the collection. In 2000 the University named the campus Library “The Zuhl Library” in recognition of the Zuhl’s generous contribution to the University. The University also awarded Herbert an honorary Doctor of Letters in 2011. Herbert’s appreciation for the University and the Geology Department inspired him to set aside funds for scholarships and endowments. He wanted to leave a legacy of beautiful art pieces for people to enjoy and appreciate for many years.
Over the years, donations of petrified wood were also given to the Houston Museum of Natural Science in Texas and the Smithsonian Institute in Washington D.C.
Herbert was raised in a family of faith and he had a heart to help others. He lived to make a difference with his life. He attended St. Andrews Episcopal Church. Herbert loved finding specimens to add to his museum collection and enjoyed his relationship with New Mexico State University. Herbert also enjoyed golf, skiing, fishing, riding his motorcycle and chess. He was also a longtime member of Jornada Masonic Lodge of Mesilla New Mexico.
Surviving Herbert is his brother Rev. Dr. Robert Zuhl of Battle Creek, Michigan, along with nieces and nephews. Preceding him in death was his wife Joan, a sister Esther, a brother Fred and his parents, Fred, and Emma Zuhl.
Gifts in memory of Herbert Zuhl may be made payable to, and sent to, “New Mexico State University Foundation, Inc.” P.O. Box 3590, Las Cruces, NM, 88003. Correspondence or check memo should specify the gift is for the benefit of the “Friends of the Zuhl Collection Fund.” Online giving can be done at giving.nmsu.edu/zuhl.html.
A service will be held at a later date.
Arrangements by Getz Funeral Home, 1410 E. Bowman Ave. Las Cruces, NM 88001. Please visit www.getzcares.com to sign the local online guest book.

To send flowers to the family or plant a tree in memory of Herbert Zuhl, please visit our Heartfelt Sympathies Store.