In Memory of
Allene
Stephens (Baker)
1932 - 2021
Click above to light a memorial candle.
Memorial Candle Tribute From
Getz Funeral Home
"We are honored to provide this Book of Memories to the family."
View full message >>>
Send Flowers
Menu 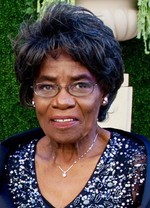 The Albert (Steve) Stephens family announces the passing of Allene Baker Stephens, age 88, of Las Cruces, New Mexico on January 22, 2021. Mrs. Stephens was born on October 25, 1932, in Forrest City, Arkansas, to Fred Baker, Sr. and Martha Rambo Baker. She moved to Las Cruces in 1944 with her parents and brother, Fred Baker, Jr. (deceased) and, with her family, became a member of Bethel Second Baptist Church of Las Cruces. She graduated as an honor student from Booker T. Washington School, the segregated school for black children of Las Cruces at the time. She went on to earn a Bachelor of Science Degree in Home Economics from Wiley College, Marshall, Texas, in 1954, where she was a proud member of the Delta Sigma Theta Sorority.

In 1952 Allene met and fell in love with Steve, the love of her life. They married in 1955. The United States Army would take them to Fort Hood, Texas, and later to Karlsruhe, Germany in 1960, where Steve was stationed as a U.S. Army Medical Non-Commissioned Officer. In 1963, they returned to the United States with their red German Volkswagen Bug filled with kids. She resumed her membership at Bethel Second Baptist Church and remained a devoted member until her passing.

Allene Stephens was simply a force of nature. She was a loving wife, a dedicated mother of six college-educated children, a fun friend, and a business partner to Steve, who after retirement from the military, owned and successfully operated the Frontier Club of Vado from 1966 to 2007. Allene did all of this while building a brilliant career as an educator, social worker, business leader and women’s advocate.

Mrs. Stephens began her career as a teacher at the Karlsruhe American School in Karlsruhe, Germany in 1960. She excelled as an educator and would become fluent in German in three years. Upon returning to the United States with her family, she taught home economics in the Vado segregated school system from 1965 to1966. Starting in 1968, Allene worked for the Department of Health and Human Services in Las Cruces and Dona Ana County. In 1977, she was named Director of the local Las Cruces Health and Human Services office. Allene grew in her profession over the years and would ultimately serve as Supervisor of Dona Ana County Adult Protective Services.

Throughout her working years, Mrs. Stephens was known for her business and community leadership and for being a staunch advocate for children, the aging, and women’s rights. She would become fluent in Spanish as she worked to serve those in the local community. In 1975 Governor Jerry Apodaca named her to the New Mexico Commission on the Status of Women, where she would serve until 1979. In January 1976, the City of Las Cruces Commission elected her to the Board of Directors of Memorial General Hospital, where she would serve as Chairman of the Building and Real Estate Committee and on the Finance and Audit Committee. Allene was the first black person to serve on the Board of Memorial General Hospital. In 1977 Allene was recognized nationally for her long-standing service in government. In that same year, she worked alongside women’s advocate Mrs. Francis Williams and others to plan the Statewide and International Women’s Conference, which was a part of a series of events that advocated for the rights and responsibilities of women around the world. Allene retired in 1993.

Mrs. Stephens was a wonderful wife, mother, grandmother and aunt. She especially enjoyed rooting on her band-playing, cheerleading, softball-playing kids. She was also an exquisite seamstress and tailor, expert fisherman, winning pinochle and domino player, and an avid fan of the Dallas Cowboys. She loved New Mexican food with the hottest Hatch chile, and she loved travel adventures around the world. Some of her favorite destinations were Hawaii, Seattle, Las Vegas, Iceland, China and anywhere her grandchildren were.

Allene was a brilliant, brave, inspiring, compassionate black woman who lifted and stretched everyone who knew her. We honor her and thank her for all the lessons and values she has instilled in us. She is our “Queen” and will be with us always.
The Stephens family extends our sincere appreciation to the loving caregivers who supported our family to care for Mrs. Stephens at home through the years. Your dedicated service allowed us to chart a path for her to age gracefully and with dignity at home with those who loved her. We are forever grateful for your love, professionalism and enduring compassion.
In lieu of flowers or food, anyone wishing to honor Mrs. Stephens is asked to donate in her name to Jardin de los Niños, a local non-profit, educational program that supports Dona Ana County homeless and near-homeless children and their families. Jardin de los Niños is located at 999 W. Amador, Suite E, Las Cruces, NM 88005. Donor support can be reached at 575-522-2111.

A private family burial and memorial service will be held to honor Mrs. Stephens.

To send flowers to the family or plant a tree in memory of Allene Stephens (Baker), please visit our Heartfelt Sympathies Store.