In Memory of
Klim
Maling
1929 - 2021
Click above to light a memorial candle.
Memorial Candle Tribute From
Getz Funeral Home
"We are honored to provide this Book of Memories to the family."
View full message >>>
Send Flowers
Menu 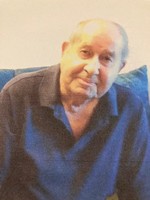 Klim was born in the town of Insterburg in former East Prussia, Germany. When the Russian front approached in 1945, everybody fled, and after WWII, that area became a new part of Russia. He visited his place of birth after the war; its new name was Czerniahovsk in the Kaliningrad Oblast. There had been a total population turnover; only Russian speakers were there, and none of the former cemeteries remained.
In 1939, when he was nine, the whole family moved from Germany to London, England. In the ‘40’s he, like a great many of London’s children, was sent to the countryside to avoid the worst of the bombing. In Klim’s case, this meant a year in boarding school in Midlands. He was soon playing cricket and learning to speak English with a good middle-class accent.
At sixteen he was apprenticed to a factory where he was supposed to learn tool and die-making, carpentry, foundry etc., and some courses leading to an engineering degree. But Klim, too impatient with the apprenticeship system, enrolled in a Polytechnic, where he completed an external engineering degree. Obligatory National Service then beckoned. One day he (well, the whole unit) had the honor of being inspected by Princess Elizabeth. At this time, the Korean War was ongoing but fortunately so was Britain’s war with Egypt over the Suez Canal. From a soldier’s viewpoint, service in Egypt was safer. He never heard a shot fired.
His service over, back in London, good jobs were hard to find in post-war Britain. He made the smartest decision of his life: he moved to Canada, which welcomed immigrants. There, he found a job with an aircraft company maintaining a computer. Computers were then a novelty. Klim was, thus, in the mid ‘50’s in on the very beginning of the computer age. Moving to Canada, and finding a job with computers, were two pieces of good luck.
In 1956, Klim entered the University of Michigan and by some mysterious process his student visa became a green card. After graduation he got a job as a programmer at MIT on an artificial intelligence project. We now know, fifty years later, Klim explained, that MIT was on a completely wrong track. However, he said, he got to go to one of the earliest artificial intelligence conferences, in London, where snappy Americans called it, AI while the Brits called it “The Mechanization of Thought Processes.” Indeed, they are two different languages.
Klim left MIT for IBM in Poughkeepsie, NY, which he found a lovely place to live. Vassar College is there. He married a Vassar girl, became a citizen, and lived there for thirty years.
Part of the peace agreement signed by Egypt and Israel in 1979, provided that Israel would hand the Sinai Peninsula back to Egypt but would retain a right to tourism. An Israeli cousin of Klim’s strongly recommended that he take a tour, which he did. “It was indeed,” he said “an extraordinary experience!” The highpoint was to climb Mt. Sinai before dawn and watch the sunrise in the clear, dry desert air from the peak. The sun was visible, due to refraction of light, below the horizon until its rim burst blazing into the day. After his Sinai experience, Klim became interested in deserts, and took a degree in Arid Land Studies at Texas Tech after retirement.
To get some practical experience of deserts, he then accepted a Peace Corps assignment in Niger, a former French colony in the Sahel, a country between Algeria and Nigeria. Stationed in a village Darey of about three hundred people, he enjoyed the benefits of severe culture shock.
After his tour in the Peace Corps, Klim returned to Poughkeepsie. He had many friends there and still though of it as a lovely place to live. It was after the death of a close friend that he decided to come once more to a desert, moving to Las Cruces in 1995. He moved to Good Samaritan Retirement Village in 2018 where he enjoyed the people, Bocce Ball, Make-Believe Theatre, and social gatherings. And of course, the desert.
(From an article written for a Good Sam’s publication, by fellow resident Fran Browne., in 2018)
Courtesy of Hospice, Klim spent his last days in comfort of his own apartment and with his friends.

To send flowers to the family or plant a tree in memory of Klim Maling, please visit our Heartfelt Sympathies Store.