In Memory of
Constance
Bannister (Covert)
1951 - 2021
Click above to light a memorial candle.
Memorial Candle Tribute From
Getz Funeral Home
"We are honored to provide this Book of Memories to the family."
View full message >>>
Send Flowers
Menu 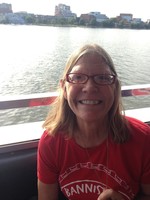 Constance Covert Bannister, better known as Connie, age 69, died peacefully in her sleep January 4, 2021, in Las Cruces, NM. A long-time fan of guardian angels, she is now among their ranks.

Born in Pennsylvania, she grew up in Mount Lebanon where she was a high school Rockette – an achievement she was always quick to point out. Connie went on to Penn State and Duquesne University, earning a bachelor’s and master’s degree in education. A devoted special education teacher, she taught for nearly three decades before retiring from the Las Cruces Public Schools in 2017.

She set off an extraordinary series of subsequent events the evening she tapped the shoulder of her future husband at the wedding of some mutual friends. “Rick Bannister, 26, Washington, PA, right? I’m Connie Covert, you know, like covert operations,” she said. The rest is history.

She is survived by that same man, Rick Bannister, along with sons Justin, Seth and Zachary; daughters-in-law Trisha, Nancy and Jamie; and grandchildren Collin, Addison and Jackson. She is also survived by her brothers, John and Andrew, and her twin sister, Carol. She was preceded in death by her parents, John and Sylvia Covert.

Likely the most harrowing thing she ever did was to drive a 1988 Oldsmobile Cutlass Calais across the U.S. during her family’s move from Pennsylvania to New Mexico. That tiny car, overpacked with items, also contained one of her sons, a dog and a cat, and followed a U-Haul filled with the rest of her family and their belongings for four days across three time zones before arriving in New Mexico. There, her family found warmer temperatures and an opportunity for a better life.

Among the best advice she gave her children was that when you’re in doubt, “just wing it – you’ll be able to figure it out as you go.” The comforting words she would often deliver in times of uncertainty were, “everything is going to be alright.” And, most importantly, the best laughs will always include a snort.

She would often tell you that if you come across a feather, it’s likely from a guardian angel watching over you. We’ll definitely be on the lookout for feathers going forward. We’re also thankful angels don’t have to worry about navigating traffic circles or driving after dark. It’s probably a good bet that our newest angel will still find a way to worry about her family and whether the Pittsburgh Steelers are going to be able to win from week to week.

A remembrance of her life will take place at 1 p.m. Thursday, January 14. Because of COVID-19 restrictions, friends and family are encouraged to watch a live stream of the event available at facebook.com/getzfuneralhome.

To send flowers to the family or plant a tree in memory of Constance Bannister (Covert), please visit our Heartfelt Sympathies Store.