In Memory of
Charles Allen
Poe
1949 - 2020
Click above to light a memorial candle.
Memorial Candle Tribute From
Getz Funeral Home
"We are honored to provide this Book of Memories to the family."
View full message >>>
Send Flowers
Menu 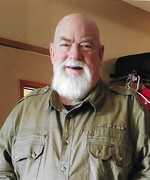 Charles Allen Poe “Chuck” aka Chuckwagon Dragon aka Kegalicious, 71 died at his home in Las Cruces, NM on December 10, 2020. Charles was born August 17, 1949 in Jackson County, Missouri to James Poe and Marguerite Poe (both deceased). Chuck ggraduated from Turner High School on June 1, 1967 in Kansas City, Kansas. He married his loving queen and wife Marcie Poe on June 3, 2000 but have been together since January of 1990.

Early in his police career he dressed up as Santa Claus and went to Booker T Washington elementary school to visit the students, he would visit needy children's homes and take presents. He enjoyed hosting barbecues for his family and friends, hosting pool parties for his nieces, nephews, and grandkids.
Family was always very important to him whether or not they were blood related he was always there for people to confide in him and willing to help others in any way he could. Chuck put 100% into everything he did in work, sports, and family. He loved with all his heart!

He is preceded in death by his parents James and Marguerite Poe and his sister Cindy Ann Poe along with his best friend Charlie Apodaca.

He considered all his military and police brothers and sisters’ part of his extended family. His dedication to the Army and LCPD was beyond compare. He was a wonderful father figure to those without one, had many honorary children and grandchildren. He was a very influential person on many of their lives.

To send flowers to the family or plant a tree in memory of Charles Allen Poe, please visit our Heartfelt Sympathies Store.