In Memory of
Leland Richard
Himes
1928 - 2020
Click above to light a memorial candle.
Memorial Candle Tribute From
Getz Funeral Home
"We are honored to provide this Book of Memories to the family."
View full message >>>
Send Flowers
Menu 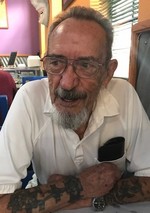 Leland Richard Himes
Leland Richard Himes, “Jack," passed away peacefully in his sleep at La Posada Hospice, on November 25, 2020 in Las Cruces, NM, at the age of 92.
Jack is survived by his biological son, Richard Von Wolff and daughter-in-law, Terri Von Wolff of Las Cruces, NM, grandchildren, Alexandra Von Wolff (husband Leland Webb) of Tokyo, Japan and Nicholas Von Wolff of Las Cruces, NM; his brother, Hal Ivan Himes of Brigham City, UT, numerous nieces, nephews, great nieces and nephews. He is preceded in death by his parents, Charles Lester and Mary Eula Jane Roach Himes of Park City, UT, his siblings Mary Dorothy Mayne of Grants, NM, Charles Eugene Himes of Everett, WA, Margie Lou Smith of Park City, UT, and Lela Beverly Lindsay (Jack’s twin “Jill”) of Park City, UT.
Jack was born on February 25, 1928 in Park City, UT minutes after his twin, Lela, to Charles and Mary Himes. Even though he was the younger twin, he took charge on that first day of kindergarten. After the twins walked through the door, he grabbed Lela’s hand, did an about-face, and marched them back home. Jack was not having any of it! He graduated from Park City High School and enlisted in the US Navy in 1946. Jack had many adventures before leaving the US Navy to return to civilian life. Jack spent many years working in the mining industry where he met his wife, Joan Evelyn Daisy Boyd, and had a son, Richard. After a short marriage, Jack worked in Hotel/Resort management in several states, but settled in Wisconsin, spending his time as manager/cook/caretaker of a large resort. Retirement came with medical scares and he moved back to New Mexico to reconnect with his son and family.
Jack loved to cook and read, especially western novels. He had a great love of music, particularly Broadway show tunes by Andrew Weber with Sarah Brightman singing. He worked with his young grandchildren, offering gourmet snacks as bribes after school to get homework done. He made new friends wherever he went. He made cheesecakes for his doctor. He bought flowers for medical personnel on their cancer anniversaries. He knew the people at his bank as well as the greeters at his local Walmart and called them by name. The small guest house he lived in for 27 years was part of a larger property. Here in Las Cruces (starting in his 60’s), he loved staying active. Jack helped maintain the property where he lived, to include watering pecan trees, trimming, cutting grass, and being the friendly/funny greeter. He kept the property under his watchful eye until the end.
There will be a celebration of life, in the future, when family and friends can all safely travel and be together. In lieu of flowers, please send donations to a Hospice in your community in Jack’s name, as they do so much with so little. Condolences can be sent to www.getzcares.com. The family would like to thank home health aide, Korie, and nurses, Debby and Carol for their caring and loving support these past years. Special thanks to La Posada Hospice in Las Cruces, for making Jack’s final hours so peaceful.
Arrangements by Getz Funeral Home, 1410 E. Bowman Ave. Las Cruces, NM 88001. Please visit www.getzcares.com to sign the local online guest book.

To send flowers to the family or plant a tree in memory of Leland Richard Himes, please visit our Heartfelt Sympathies Store.