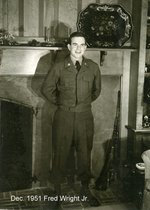 FRED J. WRIGHT, JR., age 91, passed away peacefully on Wednesday August 26, 2020 at Blue Horizon Assisted Living in Las Cruces, NM. Fred was born on July 28, 1929 in Columbus, Ohio to the late Fred and Belinda Lorene Wright. Also, preceding him in death were his beloved sister Janet Barrett; wives Marilynn, Charlotte and Ann; sons Fred and Judson; stepdaughters Sandy and Cindy.
Fred attended Ohio State University and was a proud veteran of the Korean conflict (1951-1952). He relocated to Arizona with his first wife Marilynn in 1961. Fred was involved in real estate and life insurance sales until 1975, when he started his own drapery company. He loved being a small business owner. He married Charlotte in 1974 and was widowed in 1995. He married Ann in 1997 and relocated to Boise, Idaho. Ann passed away in 2010. He relocated to Las Cruces, New Mexico in 2014. Fred was a dedicated husband, father and committed caregiver for two of his wives and one of his daughters-in-law.
He loved the outdoors and was an accomplished fisherman. Fred was seen stalking the creeks and lakes of the Big Horn Mountains of Wyoming well into his early eighties. He was actively involved in the various churches he attended throughout his life. He loved people, his family and especially children and grandchildren.
Fred will be deeply missed by his loving sons, Stephen, David and Troy and first Cousin Richard (Louesa) Foster; his grandchildren, Glenn, Daniel, Jason, Sarah Eli and Simon and his six great grandchildren.
An online memorial Service will be held Wednesday, September 9th at 6:30 pm MDT via zoom https://us02web.zoom.us/j/2999242905. A graveside service at the Idaho State Veterans Cemetery will be held on September 18, 2020 at 1:00 pm.
Arrangements by Getz Funeral Home, Las Cruces, NM. Please visit www.getzcares.com

To send flowers to the family or plant a tree in memory of Fred Judson Wright, please visit our Heartfelt Sympathies Store.