In Memory of
Lynna Gaye
Asbury (Heick)
1946 - 2020
Click above to light a memorial candle.
Memorial Candle Tribute From
Getz Funeral Home
"We are honored to provide this Book of Memories to the family."
View full message >>>
Send Flowers
Menu 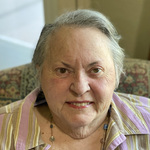 Lynna Gaye Asbury passed into the arms of Jesus, at her home on Monday, August 17, 2020.
Lynna was born December 2, 1946 in Las Cruces, NM to Phil L. “Salty” and June (Bell) Heick. Lynna Graduated from Bayfield High School, Bayfield, CO in 1964, and attended college at Ft. Lewis, in Durango, CO, and Eastern Arizona in Thatcher, AZ before her family moved back to Las Cruces, NM. Lynna attended NMSU where she pledged with Delta Zeta Sorority in 1966. She also met her loving husband, Richard K. Asbury while attending NMSU in 1967. They married later that year in Ciudad Juárez, Mexico.
Lynna is preceded in death by her parents, grandparents, James A. and Iva (Mason) Bell, and Louis Bernard Heick Sr. and Lula Mae (Hamilton) Heick, and her brother, Phil R. Heick.
Lynna is survived by her husband of nearly 53 years, her son Richard L. Asbury and wife Jillian Ross, grandson Ashton K. Asbury, nieces Piper (Heick) Gibson, and Bailey (Heick) Williams. and 4 cousins.
Lynna worked at as a technician at the Cotton Fiber Lab at NMSU, a Teacher Aid at Mayfield High School, and taught at Hermosa Heights Elementary, and Zia Middle Schools in Las Cruces, NM and Rio Grande School, St Catherine Indian School, and E.J. Martinez Elementary in Santa Fe, NM. Lynna was a creative and talented teacher who inspired so many students who still admire and love her to this day.
Everyone loved Lynna who will always be remembered for her stories, creativity, artistic abilities, love of playing games and for her smile and contagious laughter. She leaves a legacy of love, learning and generosity that will not be forgotten.
In lieu of flowers, the family asks that donations be made to the Mesilla Valley Hospice in Lynna’s
Memory.
Arrangements by Getz Funeral Home, 1410 E. Bowman Ave. Las Cruces, NM 88001. Please visit www.getzcares.com to sign the local online guest book.

To send flowers to the family or plant a tree in memory of Lynna Gaye Asbury (Heick), please visit our Heartfelt Sympathies Store.