In Memory of
Sharon Lee
Wooden (Anderson)
1932 - 2020
Click above to light a memorial candle.
Memorial Candle Tribute From
Getz Funeral Home
"We are honored to provide this Book of Memories to the family."
View full message >>>
Send Flowers
Menu 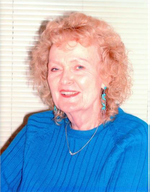 Dr. Sharon Lee Wooden, a long-time resident of Las Cruces, passed away peacefully on Sunday, July 26, 2020. Sharon was born in Boise, Idaho in 1932. She recently celebrated her 88th birthday and was looking forward to gathering with friends once the pandemic restrictions were lifted. Sharon graduated with a Bachelor of Science degree with an emphasis in Music Education from the University of Oregon in June 1953. It was at the University of Oregon that she met James (Jim) Wooden, whom she would later marry on December 26, 1953. Sharon and Jim originally lived in Salem, Oregon before moving to Las Cruces. She was a classroom teacher in the Las Cruces Public Schools from 1954 to 1965 teaching fourth and sixth grades. While working at the Las Cruces Public Schools, Sharon went back to school and earned her Master of Arts degree with an emphasis in Educational Psychology in May of 1958 from the New Mexico College of Agriculture and Mechanic Arts. Sharon left the public schools in order to pursue her doctoral studies at New Mexico State University and graduated with her Doctor of Education degree in May 1969 specializing in Curriculum and Instruction. In 1970, she started her career as a professor at NMSU, teaching in the College of Education in several departments, including the Department of Elementary and Secondary Education, the Department of Educational Specialties, and the Department of Curriculum and Instruction. Sharon served as Head of the Department of Educational Specialties from 1982 through 1986, before returning to her first love of classroom teaching in the Department of Curriculum and Instruction until her retirement in 1995. During her career at NMSU, Sharon wrote multiple research grants, mentored innumerable students, spoke at numerous conferences, and collaborated with multiple organizations across the state and the country to improve the field of education and ensure better outcomes for public school children. She also was elected to and served on the Las Cruces School Board in 2006 and 2007. Sharon was an incredible woman, with multiple professional accomplishments in addition to a wide variety of interests. While Jim was alive, Sharon and Jim were avid square dancers and participated in local and regional dances. Sharon and Jim were also avid Aggie fans and attended basketball, football, and volleyball games together, a passion which Sharon continued to enjoy after Jim’s death. The couple were also members of the Picacho Hills Country Club, and Sharon retained her membership until her death and enjoyed having dinner with friends there at least monthly. Sharon often attended the National Active and Retired Federal Employees Association monthly breakfasts in memory of her husband Jim. She also was an avid traveler and traveled all over the world both with Jim and with various friends. Sharon played bridge and was a member of the Belton Bridge Center and continued playing duplicate bridge until very recently. In addition, she was a long-time member of the American Association of University Women and the Delta Kappa Gamma women’s teacher organization. After Jim’s death, Sharon attended multiple theatre productions with a group of friends. Sharon was also an accomplished pianist and played the organ in her younger years. She was an avid collector of Native American jewelry and artwork of various genres. Sharon’s biggest interest was her love of animals and she owned multiple cats and dogs throughout her life.
Sharon is survived by her brother David and sister-in-law Karlene of Idaho Falls, Idaho, several nieces and nephews, her beloved dog Mack, in addition to numerous friends, neighbors, and former students. Multiple students kept in touch with her throughout the years, which speaks volumes about her effectiveness as a mentor to one and all. Sharon will be greatly missed. Burial will be at Fort Bliss National Cemetery with her husband Jim. A celebration of Sharon’s life is planned for a later date.
Donations can be made in Sharon’s honor to La Casa, Inc., 800 S. Walnut Street, Las Cruces, NM 88001 or to Safe Haven Animal Sanctuary, 840 El Paseo Road, Suite D, Las Cruces, NM 88001.
Arrangements by Getz Funeral Home, 1410 E. Bowman Ave. Las Cruces, NM 88001. Please visit www.getzcares.com to sign the local online guest book.

To send flowers to the family or plant a tree in memory of Sharon Lee Wooden (Anderson), please visit our Heartfelt Sympathies Store.