In Memory of
Eugene Howard
Killam
1942 - 2020
Click above to light a memorial candle.
Memorial Candle Tribute From
Getz Funeral Home
"We are honored to provide this Book of Memories to the family."
View full message >>>
Send Flowers
Menu 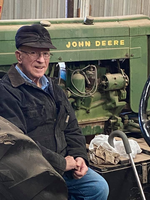 It is with saddened hearts that we announce the death of our beloved husband, father, grandfather, great-grandfather, uncle and friend, Dr. Eugene (Gene) Howard Killam, age 78 who passed away peacefully at home in Mesquite, NM on Sunday, July 12, 2020.

While attending The University of Wisconsin Oshkosh Gene met Valeria (Val) Kathleen Holewinski and they married on August 12, 1961 thus beginning a lifelong example of love and faithfulness. Gene and Val welcomed Randall Eugene and Galen Mark into the family. While their family was growing Gene attended Michigan State University Veterinary School and graduated in 1966. In 1969, together, Gene and Val opened Provincial Animal Hospital in Neenah, WI and Gene extended his thoughtful consideration of others with family pets and farm animals.

Gene’s story continues when in 1982 the family packed up and moved to Hastings, New Zealand where he worked a government job to inspect the care of animals. Following their return to Wisconsin in 1984, Gene and Val resided in Neshkoro on a modest tree farm perfect for the collection and restoration of many John Deere tractors. Gene’s hobby and love of John Deere tractors continued throughout his life as he and his brothers collected and restored many tractors for local enthusiasts and national collectors.

Gene was careful in all his ways and was a pillar in his church community. Gene chose to serve God in January 1956 and was faithful in upholding his promise to our Heavenly Father. Gene and Val began hosting a bible study in their Wisconsin home for eleven years and a church meeting was also held in their Mesquite, NM home.

To send flowers to the family or plant a tree in memory of Eugene Howard Killam, please visit our Heartfelt Sympathies Store.