In Memory of
Terence
Freeman
1935 - 2020
Click above to light a memorial candle.
Memorial Candle Tribute From
Getz Funeral Home
"We are honored to provide this Book of Memories to the family."
View full message >>>
Send Flowers
Menu 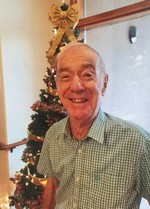 Terence Michael Freeman age 84 passed away on April 27th, 2020 in Las Cruces NM.
Terry was born in Carshalton, United Kingdom on May 5th,1935 to William and Cecily Freeman.

Following 5 years of service in the Royal Air Force he visited family in California where he decided to enroll in the engineering program at California State Polytechnic College. He graduated with a BS in Aeronautical Engineering in 1963.
After graduation he worked at the Sikorsky Company in Connecticut and then the General Electric Company jet engine division in Lynn, Massachusetts.

He met Barbara in Lynn and they married on May 26th, 1973. After retirement Terry and Barbara moved to Las Cruces in 2004 where Terry enjoyed gardening reading photography birding and traveling.

For the last two years he was a resident at the Haciendas at Grace Village where he was cared for with love and kindness. He was also under the care of Ambercare Hospice. His nurse Tobin provided excellent care and support for Terry and his wife until his passing.

Terry is survived by his wife of 46 years, sister Annette (Len) Jeffery of the U.K., and Patrick (Evelyn) Freeman of France and many nieces and nephews.

A memorial service will be held at a later date in the U.K. to celebrate his life.

To send flowers to the family or plant a tree in memory of Terence Freeman, please visit our Heartfelt Sympathies Store.