To share your memory on the wall of Rumaldo Benavidez, sign in using one of the following options:

Provide comfort for the family of Rumaldo Benavidez with a meaningful gesture of sympathy.

Print
Rumaldo “Ronnie” Kevin Benavidez, beloved son, brother, uncle, cousin and friend, went home to be with the Lord on Thursday, April 2, 2020. He passed away at Memorial Medical Center in Las Cruces, NM, at the age of 53.

Ronnie was bor... Read More
Rumaldo “Ronnie” Kevin Benavidez, beloved son, brother, uncle, cousin and friend, went home to be with the Lord on Thursday, April 2, 2020. He passed away at Memorial Medical Center in Las Cruces, NM, at the age of 53.

Ronnie was born on March 25, 1967 in Canutillo, Texas to Antonio Benavidez and Lorenza Ruiz Benavidez. He graduated from Gadsden High School in 1985 as a proud Gadsden Panther. Ronnie grew up to be a fun-loving and lively individual with a witty and side-splitting sense of humor. He loved to dance and often dressed up in his cowboy hat, jeans and boots and headed to the dance floor where he mesmerized those around him with his dance moves, greens eyes and good looks. As an adventurous adult, Ronnie lived in multiple areas including Las Cruces, Las Vegas and California, but Chamberino, NM was home.

After high school, Ronnie worked jobs in the baking industry. He gained experience and blossomed in ingenuity and in time opened his own bakery, Tommy’s Cake Shop, in Las Cruces, NM. He eventually expanded operations to include a restaurant and catering business. He excelled in making beautiful wedding cakes and sculpted cakes. He competed in cake decorating and received many accolades. Always looking to broaden his skills and grow his business, Ronnie took classes in Albuquerque, NM and shared his vast skills as a baker and cake decorator to teach others at his Las Cruces bakery. He will be remembered for his decorating and creativity.

“We love you. Mom adores you. You are in our hearts always. We will miss your sense of humor and your laugh.”

No public funeral services are planned (under the circumstances) but well wishes and expressions of love are welcomed on the Getz Funeral Home website.
Read Less

There are no events scheduled. You can still show your support by sending flowers directly to the family, or planting a memorial tree in memory of Rumaldo Kevin "Ronnie" Benavidez.
Plant a Tree

We encourage you to share your most beloved memories of Rumaldo here, so that the family and other loved ones can always see it. You can upload cherished photographs, or share your favorite stories, and can even comment on those shared by others.

Posted Apr 16, 2020 at 04:45pm
We are so sorry for your loss! We had the pleasure of meeting Mr. Benavidez through providing transportation to his medical appointments. Our drivers enjoyed having him whenever he was assigned to our transportation company.

I personally drove him to his appointments as well. He and I always had such great conversations to and from his appointments. I enjoyed hearing about his baking days the most. He would light up when talking about that part of his life. He would also give me much needed cooking tips.

As much as he was struggling with his health, he was always in such a good mood. It was a pleasure being of service to him! May you find comfort in remembering all of the great memories you share with him and in knowing he touched so many people. We will never forget him!

Posted Apr 09, 2020 at 03:23pm
I knew him as Kevin when I moved to New Mexico. He was the best friend I ever had and will miss him with all my heart. We had many adventures together and he made laugh until my stomach hurt. We stayed in touch even though I moved back to Michigan. My heart and prayers go out to the family that will always be mine too. They treated me with such kindness. I miss you all.
Linda Seppanen
Comment Share
Share via:
BE

Posted Apr 07, 2020 at 11:15pm
I am going to miss Ronnie, aka Kevin, I knew him since headstart, as Chamberino would go to La Union Elementary, went to jr high and high school together, we would all hang out together, after we graduate he would come visit me at my moms house in La Union, , then he was at Albertsons, then he opened his business, were I'd stop at least 3 times out of week and buy burritos, pastry and take to work. He made my daughters cake for her quince, attend ceremony for him , then didnt see him for bit, then I saw him again in Anthony working at bakery, then no more., Ran into his brother Bobby, I approached him as they look alike, stayed talking with him, said he with his mom, I called several times and no answer, I searched for his moms house and never found it, we would have lots of good times in elementary,, this hurts so much hearing these news, I will never forget you my dear friend, till we meet again, Rest in peace amigo, ❤😭
Comment Share
Share via:
DR

Posted Apr 06, 2020 at 04:14pm
Even though I was a few years older, I will always remember Ronnie from visits to my Tia's home in the country when I was a kid. I remember his joking and laughing. As we grew older I will remember his caring and generous nature. It was always good to see him at work in his bakery, and try his free samples. Though a few years back I can still taste the last delicious desert he made for a family gathering. I will miss my cousins always cheerful smile and contagious laugh. My prayers are with my Tia and Cousin's. David Ramirez and Family.
Comment Share
Share via:
AA

Lencha my condolences to you and the family. Albert E Apodaca 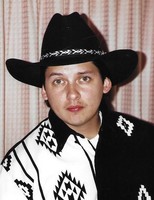