In Memory of
Jackie Dale
Ward
1947 - 2020
Click above to light a memorial candle.
Memorial Candle Tribute From
Getz Funeral Home
"We are honored to provide this Book of Memories to the family."
View full message >>>
Send Flowers
Menu 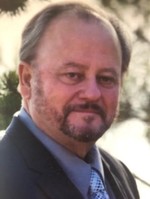 On Monday, March 30th, 2020 Jack Dale Ward, loving husband and father of 3, passed away at the age of 72. At his side when he passed, was his loving wife of 50 years, Lydia Chavez-Ward.

Jack was born in Portales, New Mexico in 1947 to Jay A Ward and Lela Worley-Ward. Growing up on the family farm in Clovis Jack won numerous 4-H Blue Ribbons for raising cattle and livestock. While attending Clovis Highschool Jack studied at the Foreign Language League School at Villard De Tans France. Following graduation Jack went on to receive a B.A degree in Radio and Television Production from the University of New Mexico. During his undergraduate studies Jack met and married Lydia before joining the US Airforce. Serving in Germany as a Staff Sergeant in the field of Audio-Visual Sound Production, Jack also earned his Master of Business Administration from the University of Alabama while Lydia worked as a Registered Nurse and earned her master’s degree in Education. Overseas Jack learned conversational Spanish, German, Italian, and French. Returning to the States Jack and Lydia started their family, a daughter and twin sons.

Jack had multiple careers. Working as a Farm Bureau Insurance Agent, teaching, and eventually retiring as a sales consultant for the Industrial Safety Industry.

Jack was an excellent cook. An avid reader and historian with a broad knowledge in geology, geography, astronomy, science, and electronics. Jack was a painter, who’s art is still enjoyed by his family placed in their homes. Jack’s passion in life, in a true “mountain man” spirit, was shooting, camping, and hunting. Jack enjoyed nothing more than attending Mountain Man “Rendezvous”. Hunting with a muzzle loader he made himself, dressed up in his homemade buckskin suit, complete with a bear skin hat, moccasins and camping in his own teepee. He often took his children on hunts and camping expeditions with the teepee as their shelter. He loved to brag that he was an “extra” as he was at the Rendezvous where the motion picture The Mountain Men was filmed.

Jack is survived by his loving wife Lydia, his three children, Marisa and her husband Aaron, Matt, and Chris, 3 grandchildren, Austin, Logan, and Gage, his sister Janet, brother Jody, and many cousins, nieces and nephews. He had a special friendship with his nephew Gabriel Chavez and held him deeply in his heart.

A celebration of the life of Jack Ward will be held at a time and place to be determined when all of Jacks friends and family can gather to remember a Great and Brilliant man. Jack will be dearly missed!

To send flowers to the family or plant a tree in memory of Jackie Dale Ward, please visit our Heartfelt Sympathies Store.