In Memory of
Francis
Frazier
1928 - 2020
Click above to light a memorial candle. 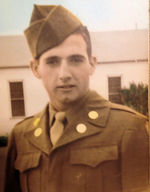 Mr. Francis John Frazier, “Frank,” of Alamogordo, NM passed peacefully to his Lord on Wednesday, March 25, 2020 at Mesilla Valley Hospice in Las Cruces, NM at the age of 91. He was born November 4, 1928 in Waltham, Massachusetts to Albert and Margaret Frazier but grew up in Cambridge. The youngest of four children, he was affectionally nicknamed “Babe.” Growing up during the depression, he worked several jobs, including setting bowling pins, running errands, and working at a meat packing plant to earn some extra money, especially for the movies. At the age of 15 he was credited with saving a drowning girl in the Mystic River just before she was taken out to sea with the tide.
Frank attended Rindge Technical High School where he excelled at mechanical drafting. He played varsity ice hockey for three years before graduating in 1947. In October of 1947 he enlisted in the U. S. Army and attended basic training in San Antonio, Texas. There he was transferred to the U. S. Army Air Corp and was sent to Cheyenne, Wyoming to the Corp of Engineers school of drafting and design. He was later assigned to Holloman Air Force Base where he attained the rank of sergeant. While celebrating the 4th of July at White Sands National Monument with a couple of his Air Force buddies, he met the love of his life, Florence Preshaw, who had just moved to the area from California. Dad always got a kick out of telling the story about how he “pulled rank” and ran his buddies off so that he could have Mom all to himself! In 1949 Frank was Honorably Discharged from the Air Force and soon after, he and Florence married on October 17, 1949. Frank went to work for Land Air as a photo technician and draftsman for the next two years.
The couple moved to Los Angeles, California in 1951 where Frank attended training for precision machining of aircraft parts and worked for North American Aviation Company. After three years they returned to Alamogordo, and Frank began his long federal civil service career in drafting and design for both Holloman and White Sands Missile Range. He also took numerous courses at the Alamogordo Community College.
Frank and Florence raised four children, Beverly, Kenneth, Donald, and Marlene (“Tildy.”) They were very proud that all their children graduated from or attended college. The family spent many wonderful weekends tobogganing or picnicking in Cloudcroft. They took several memorable vacations to destinations such as Disneyland, Marineland, and the Pacific beaches. The family enjoyed camping at Pike’s Peak, Yosemite and visiting the Galveston/Houston area. Dad was fun-loving and entertained the family with his karaoke machine, his favorite songs being “Elvira” and Sinatra’s “My Way.” He was extremely patriotic and flew the flag on all U.S. holidays. He was a huge fan of the Boston Bruins, Red Sox, and the Patriots. He also coached a local boys’ baseball team in his younger days and played a little golf, as well. Frank was a resourceful and smart man, designing and building a large addition to the family home.
Upon Frank’s retirement, he and Florence often traveled to the Laughlin/Las Vegas area and thoroughly enjoyed the sites and shows. They especially loved seeing the entertainers from their era, such as Debbie Reynolds and Phyllis Diller. They also attended local theatre shows, concerts, and events such as the Senior Prom. They opened and ran a childcare business from their home for five years. Frank played ball and other games with the little ones.
Frank is survived by his four children, Beverly Haggard of Hatch, NM, Kenneth Frazier of Albuquerque, NM, Dr. Donald Frazier of Alamogordo (Debbie), and Marlene Fischer (Gerry) of Las Vegas, NV. He is also survived by four grandchildren, Michelle Vessel (Mike) of Longmont, CO., Casey Haggard (Megan) of Las Cruces, NM, Andrew Haggard (Tiffany) of Las Cruces, NM, and Joel Frazier of Albuquerque, NM. Frank has five great-grandchildren, Aiden and Brennan Vessel of CO, Preston and Holly Haggard of Las Cruces, NM, and Dustin Wagenblast of Las Cruces, NM. We will miss him!
Frank was preceded in death by his beloved wife of 61 years, Florence, in 2010 and son-in-law, Gary Haggard, in 2009.
Cremation has taken place under the care of Getz Funeral Home, Las Cruces, NM. A Memorial Service in Alamogordo will be announced at a later time, due to the corona virus emergency.

To send flowers to the family or plant a tree in memory of Francis Frazier, please visit our Heartfelt Sympathies Store.