To share your memory on the wall of Manuel Valenciano, sign in using one of the following options:

Print
Manuel Valenciano, born December 1, 1943 passed away peacefully in the presence of his loving family on February 2, 2020, at the young age of 77.

He is the oldest son of Francisco Valenciano and Francisca Bibanco. At a young age, Manuel ... Read More
Manuel Valenciano, born December 1, 1943 passed away peacefully in the presence of his loving family on February 2, 2020, at the young age of 77.

He is the oldest son of Francisco Valenciano and Francisca Bibanco. At a young age, Manuel and his younger brother, Jose Dolores Bibanco were loved and raised by very compassionate families. We would like to honor and thank the Ortiz-Bibanco and extended family, Juan and Mary Lou Madrid and all the Estrada’s for their care, love and devotion.
Manuel served his country in the U.S Army - Company G Airborne; Division one: sharpshooter (M-1 Rifle). Not long after, he started his career with the City of Las Cruces Sanitation Dept.
He was married to Maria Elena (Parra); together they raised four children of the family home, Jose Luis, Rosalia, Ricardo and Jaime Valenciano.

He enjoyed life fully and had many loves and interests. Some were, fishing, hunting and camping. In his earlier days he played softball and loved tinkering with anything that had a motor in it! He had the biggest heart and his generosity and helping hands had no limit. To lay sentiment to this fact, Manuel baptized 15+ and was dedicated to all of them. He adored his family and grandchildren to no end. He lived and delighted in each and every one of them. He was truly blessed and loved by many. He will never be forgotten.

He is survived by his extended family, brothers and sisters, his extended Ortiz- Bibanco family of Roswell, NM, His four children and Eleven grandchildren: Blossom, Desarae, Mike, Luis and Nick (Jose), Jeanine and Daniel Zertuche (Rosalia), Eva Keefauver (Ricardo) , Mariah and Janessa Valenciano and Jorge Carrillo (Jaime). He also was blessed with 8 great-grandchildren.

Manuel was preceded in death by both his parents, extended parents, his brother , the mother of his children and grandson, Bobby Zertuche.

To plant a memorial tree in honor of Manuel Valenciano, please visit our Heartfelt Sympathies Store.

We encourage you to share your most beloved memories of Manuel here, so that the family and other loved ones can always see it. You can upload cherished photographs, or share your favorite stories, and can even comment on those shared by others.

Posted Feb 11, 2020 at 05:20pm
RIP grandpa Manuel. You will be missed dearly. Thank you for loving me unconditionally. You will always have a special place in my heart. To my Valenciano family,-I'm sending all my love from the east coast. May God wrap his loving arms around you during this difficult time. As the days pass and you continue to mourn, I pray that all the memories are enough to give you the strength that you may need. I know that he is looking down saying "ahhhhhh, don't cry! Be happy, it's okay. It's going to be okay!!"
Love you all,
Dezz
Comment Share
Share via:
DH

Posted Feb 11, 2020 at 04:12pm
Sending all my love during this time. Gone but not forgotten. Grandpa Manuel will forever have a special place in my heart. He was a great man.

Posted Feb 11, 2020 at 12:18pm
My sincerest condolences to all of Mannys family. We may not have been related by blood but he will always be my best friend, uncle and all that is associated with family. May he rest in peace and know he was much loved by all.
Comment Share
Share via: 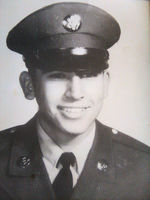