In Memory of
Antonio "Tony"
Luna
1954 - 2019
Click above to light a memorial candle.
Memorial Candle Tribute From
Getz Funeral Home
"We are honored to provide this Book of Memories to the family."
View full message >>>
Send Flowers
Menu 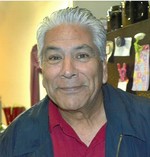 Antonio “Tony” G. Luna III was surrounded by his family when he entered eternal peace in heaven on Saturday, November 2, 2019 in Las Cruces, New Mexico at the age of 65. Antonio was born January 18, 1954 in El Paso, Texas to Antonio Luna II & Elena Gallegos. On December 9, 1972, Antonio married his sweetheart, Yolanda Lopez, in the Basilica of San Albino Church in Mesilla, New Mexico. They were married for 47 happy years.

He was preceded in death by his stepfather, Margarito Lopez; his in-laws, Pedro and Teresa Lopez; brother-in-law, Jose Albino Lopez, and nephew Larry Trujillo.

A visitation is scheduled for 10:30AM on Friday, November 8, 2019 at the Basilica of San Albino, with the recitation of the Holy Rosary to begin at 11:30AM, followed by the Funeral Liturgy at 12:00PM. Rite of Committal will be at San Albino Catholic Cemetery.

To send flowers to the family or plant a tree in memory of Antonio "Tony" Luna, please visit our Heartfelt Sympathies Store.