In Memory of
CAPT Walter F.
Baker
1931 - 2019
Click above to light a memorial candle.
Memorial Candle Tribute From
Getz Funeral Home
"We are honored to provide this Book of Memories to the family."
View full message >>>
Send Flowers
Plant a Tree In Memory of Your Loved One
Click Here
Menu 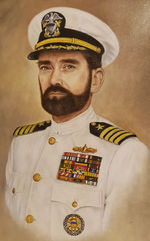 CAPT Walter F. Baker, USN (Ret) passed away at Memorial Medical Center in Las Cruces, NM, on June 18, 2019 at the age of 87. He is survived by his wife Elsa Baker, brother Charles Baker (Maureen) of Lake of the Ozarks, MO, son Roger Martin Baker II (Teresa) of Las Cruces, daughter Deborah Kinnison (Gaston Kearby) of Houston, TX and son William Baker of Las Cruces. Grandchildren include Michael, Jennifer and Samantha Kinnison of Houston, TX and Devyn Tucker (Maarken) of Anchorage, Alaska. He is preceded in death by his parents Roger and Erma Baker and his brother Richard.

Walter Baker was born on September 24, 1931 in Zeigler, IL, to Roger and Erma Baker. He is a graduate of De Paul University (B.S. Math) in Chicago, the Naval Post Graduate School in Monterey, CA, and the Naval War College.

Walter Baker was commissioned in the Navy in 1954. He served on Destroyers, Amphibious and Surface Force ships on both coasts of the country; the second third (of his Naval career) was spent in and out of Vietnam; and the final third (of his career) was spent in Logistics, the Naval War College (graduated “With Distinction”), the Joint Chiefs of Staff (J4) (the Pentagon), replenishment and maintenance of the Sixth Fleet in the Mediterranean and Command of the Military Sealift Command in the Mediterranean. He retired in 1984.

In December of 1987, CAPT Baker and family moved to Las Cruces, NM. Immediately upon arriving in Las Cruces, he got involved in community service activities, service clubs and Veterans organization activities. When recommended for and receiving the Vietnam Veterans of America, State of New Mexico’s “Profile of Courage” Award he was actively supporting some 38 local and otherwise organizations, serving either as an officer or a member of the board. Some of these many organizations are: the American Legion, Legion Riders, Vietnam Veterans of America, Military Order of the World Wars, Reserve Officers Associations, Sons of the American Revolution, Military Officers Association of America, the Mayor’s Committee on Aging, the 4th of July and the Veterans Day Parades, SCORE, Welcome Wagon, AARP, Sunrise Lions Club, Rotary Club of Las Cruces, the Boy Scouts, The Community of Hope, the Gospel Rescue Mission, voting and poll work, Habitat for Humanity, Junior and Senior ROTC efforts, Relay for Life and fundraising for the Torch Run, Operation Wounded Warrior and the homeless Veterans and the City’s homeless and needy in general.

In lieu of flowers, donations can be sent to the National League of POW/MIA Families, 5673 Columbia Pike Suite 100, Falls Church, VA 22041 or to your favorite charity.

The family wishes to thank Dr. Ann S. Mercer, M.D. for her untiring responses for care.