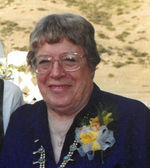 Jo Tice Bloom departed this “mortal coil” on June 18, 2019, when her strong, lifelong reliable heart gave up after a month of increased medical stress. There is deep significance in names, and her entire name was special: Nancy Jo Fostvedt Tice Bloom. She disliked Nancy from childhood — there were so many “Nancys" everywhere. She chose “Jo” and stuck with it, legalizing it. Her father, William C. Fostvedt, arrived in the United States from Norway as a child and was determined to leave everything Norwegian behind, to become 110% American. His marriage with Jo’s mother, Opal Rae Weimer, failed but Jo found a veritable ideal of fatherhood in Opal’s second husband, Fred A. Tice — ideal underscored by her legal adoption of Fred’s name. Jo’s connection with John Porter Bloom, married in 1968, was late in coming, but blossomed (dare we say!) for almost fifty-one years.
Jo was born in downtown Los Angeles on June 7, 1933, and was blessed to have a younger sister, Cyndy (1937-2014), who enjoyed (mostly) an international career in nursing education. Cyndy did not marry. Tice living relatives are descended from Jo’s stepbrother Blair, and reside in California, Texas and the Netherlands; Weimer descendants live in Oregon; Bloom family members in Virginia, Montana, New York, Florida, Massachusetts, New Mexico and California.
Finishing public-school education in the northwestern suburbs of Chicago and having a brief but memorable introduction to higher education at Reed College, Portland, OR, Jo entered Northwestern University, graduating as BA-Education in 1956. Two years of teaching in secondary schools in eastern Oregon then imbued her with a desire for graduate studies in something else! She chose American history, leading to MA and PhD degrees awarded by the University of Wisconsin-Madison in 1963 and 1967, respectively. Her dedication to history and teaching was not lessened, but enhanced, with her marriage and many subsequent residences: (1) University of Wisconsin, Whitewater, assistant professor 1965-68; (2) Bowie State College, Bowie, MD, associate professor 1969-74; (3) University of Maryland, University College, instructor 1973-1981; (4) Fulbright Lecturer, Kabul University, Afghanistan 1977-78; (5) George Mason University, Fairfax, VA, lecturer 1975-1981; (6) California State University, Sacramento, lecturer 1982-1995; (7) New Mexico State University, adjunct associate professor 1996-2003 and (8) NM Farm & Ranch Heritage Museum, lecturer 2004-07.
This eight-point list, tedious as it is, is far from doing justice to Jo’s other activities, work with Girl Scouts being especially important to her for instance: member since 1940, troop leader, volunteer trainer, staff member at events, board member in governing councils of “The Nation’s Capital” (Washington, DC) and “Tierra del Oro” (Sacramento, CA). She was Bicentennial Task Force Chair, Girl Scout Council of the Nation’s Capital, 1973-76. She was liaison and advisor to the Girl Guides of Afghanistan. Her close working and personal relationship with Zakia, head of Afghan Girl Guides, led to our welcoming and housing Zakia when she fled Afghanistan as a refugee because her homeland was taken over by the USSR.
Moving to New Mexico in retirement was actually to return to a favorite place Jo had loved as a 17-year-old Girl Scout participant in the “Dirty Diggers” summer program of Dr. Bertha Dutton, notable archaeologist and ethnologist in Santa Fe. The “Diggers” were shepherded all over northern New Mexico and Arizona, meeting present-day Pueblo and other Native Americans and examining ruins left by Ancient Ones. The girls got more than dusty in brief but sometimes exciting archaeological digs. Jo has helped edit a book on Dutton’s Dirty Diggers, anticipated for early publication.
Books, well, Jo got out a couple and contributed to many, and to many journals. Of lasting local interest: she revised and contributed a new introduction for A History of the Mesilla Valley (Yucca Tree Press, 1998), which was the Senior Thesis of Maude McFie Bloom, John’s mother, who graduated in 1903 from the New Mexico College of Agriculture and Mechanic Arts (now NMSU). Jo’s Well-Traveled Land: A History of Pioneer Park and Camp Pioneer was published by the Girl Scouts of the Rio Grande and in Password of the El Paso County Historical Society. Her articles on many historic topics have appeared in at least a dozen other journals and edited books. Her papers presented at historical conferences and other events comprise a larger list, including a number at meetings of Westerners International, and book reviews were published in at least twenty publications. Jo married a longstanding member of several W.I. corrals, and all was pleasant enough until she learned that in Washington, DC, women were not allowed to attend Potomac Corral meetings (much less to be members) except on “Squaw Night” once a year. Sure enough, that got changed! — and she became that corral’s first female Sheriff and later President of W.I.
Proud of her Honorary Membership in the Western History Association, Jo was a Life Member of the American Historical Association, the Organization of American Historians, also of the Doña Ana County Historical Society. She was proud of having been a founding member of the “Coordinating Committee on Women in the Historical Profession.” She participated and led in significant activities in several Unitarian Universalist churches over many years, notably in Reston, Virginia, and Sacramento, California. Jo became a Life Member of the American Association of University Women in 1965 and was a loyal and active supporter of AAUW everywhere she lived. When the state convention of AAUW was held in Las Cruces in New Mexico’s statehood centennial year, Jo was chosen to give the main address. A life very well lived!
Celebration of Life will be held at 2:00 pm on Saturday, July 27, 2019, Unitarian Universalist Church of Las Cruces, 2000 S. Solano Drive Las Cruces, NM 88004. In lieu of flowers please make Memorial gifts to Girl Scouts of the USA, Reed College—Opal Weimer Scholarship, or your choice.
Arrangements with Getz Funeral Home. 1410 E. Bowman Ave. Las Cruces, NM 88001. Please visit www.GetzCares.com to sign the local online guest book.

To send flowers to the family of Jo Tice Bloom, please visit our Heartfelt Sympathies Store.