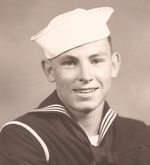 John Whitley passed away May 10, 2019 at the age of 94 at La Posada Assisted Living in Las Cruces, New Mexico.

Born April 4, 1925 in Oklahoma City, OK, John joined the Navy in 1943 and served on a ship in the Pacific until 1946. He then tried his hand at carpentry, building houses in Oklahoma City. He changed careers and worked for the Air Force at Tinker Air Force Base as an Industrial Engineer Technician. After that career ended he decided to try his hand at cattle ranching and along with his brother bought a farm in Asher, Oklahoma where he raised Black Angus cattle and irritated the heck out of oil drillers.

John loved to play golf and did so for over 30 years. Once that was no longer possible he took up model airplanes and was a member of the Mesilla Valley Model Airplane Club here in Las Cruces. Our deepest condolences to the golf ball and model plane industry, you have lost a great customer.

He also loved dachshunds and he had several in his lifetime but his very favorite was Molly. She went over the Rainbow Bridge two months before his death and it was devastating for him. She was a good and faithful dog and a wonderful walking companion.

He married Una Juanita Jackson in 1946 and they remained together until her death in 1998. She brought with her two children Carol and Bruce and he had a wonderful instant family.

We hope he is playing a good round of golf and flying a model plane in his spare time in the great beyond.

In lieu of flowers please make a donation to Safe Haven Animal Sanctuary, shaspets.com or Action Program for Animals, actionprogramsforanimals.org.

To send flowers to the family of John David Whitley, please visit our Heartfelt Sympathies Store.