In Memory of
Jack
Soules
2019
Click above to light a memorial candle.
Memorial Candle Tribute From
Getz Funeral Home
"We are honored to provide this Book of Memories to the family."
View full message >>>
Send Flowers
Plant a Tree In Memory of Your Loved One
Click Here
Menu 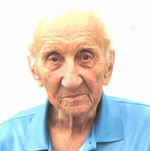 Jack Arbuthnott Soules died peacefully May 1, 2019 at the age of 91. Born in Ashtabula, Ohio to David and Lilly Soules. he moved to Las Cruces in 1955 with his wife Shirley, daughter Merrie Lee, and a PhD in Physics from the Ohio State University to take a faculty position at New Mexico State University. Sons Bull and David soon followed. In the late 1960’s, Jack was recruited to Cleveland, Ohio as the first Dean of the College of Arts and Sciences at Cleveland State University. There, he married his second wife, Shirl. They retired to Las Cruces in 2006, where they celebrated 50 years of marriage this past October.

Jack described himself as an inventor, educator, and philosopher, seeking to understand the challenges facing all of us and make our world a better place. He was a founding member of the Unitarian Universalist Church in Las Cruces, the Las Alturas Development Corporation, the Las Cruces Aquatic Team, and the Hazlo Foundation. He authored numerous books and holds patents for many inventions.

Jack is survived by his three children, Merrie Lee, Bill, and David, four grandchildren, Kevin, Keith, Leslie, and Erika, and great granddaughter, Ada. He will be greatly missed.

A private remembrance service will be held for family. Gifts may be made to the Hazlo Foundation (contact p.desimio@crucescreatives.org) or Camp Hope (http://www.donationto/MVCH4CampHope).

To send flowers to the family of Jack Soules, please visit our Heartfelt Sympathies Store.