In Memory of
Jesus H.
Carrasco
1930 - 2019
Click above to light a memorial candle.
Memorial Candle Tribute From
Getz Funeral Home
"We are honored to provide this Book of Memories to the family."
View full message >>>
Plant a Tree In Memory of Your Loved One
Click Here
Menu 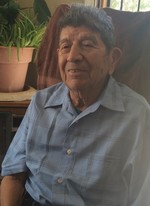 It is with deep sorrow and heavy hearts that we announce the passing of Jesus Herrera “Chuy” Carrasco. He left us here on earth and entered eternal life on Friday, March 8th, 2019 at the age of 88 at his home in San Pablo, New Mexico. Jesus was born on October 16th, 1930 in Talamantes, Chihuahua, Mexico to Manuel Carrasco and Beatrice Herrera along with his sister Rosario Carrasco Cardona. Jesus worked as a laborer in his hometown of Talamantes until he entered into the Bracero program in 1952. He then met the love of his life Alicia Terrazas in Talamantes in 1953. Shortly thereafter the two married on April 24th, 1954. Jesus and Alicia then moved to the United States in 1954 and began to lay down roots in San Pablo, New Mexico. During his journey Jesus became a proud citizen of the United States.

Provide comfort for the family by planting a tree in memory of Jesus H. Carrasco, please visit our Heartfelt Sympathies Store.