In Memory of
Angel S.
Vasquez
2019
Click above to light a memorial candle. 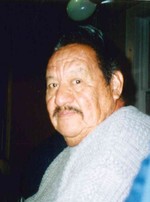 Angel Vasquez
06/01/1938 – 01/06/2019
Our dear beloved father, grandfather, brother, and friend, Angel Vasquez of Las Cruces passed away Sunday, January 6, 2019 at Casa de Oro Center surrounded by his loving family. Angel was born June 1, 1938 to Juvencio and Juliana Vasquez in Berino, New Mexico. He retired from Mesilla Valley Inn as a chef and was a member of the Roman Catholic Church.
Angel was an avid hunter and fisherman and enjoyed sharing his hobbies with his grandchildren and supporting them in all sports and activities. In his younger years he was known in the neighborhood for his cub scout leadership skills. He will be deeply missed.
Those left to mourn his passing include his two sons: David Vasquez and his wife Sally of Casper, Wyoming, and Stephen Vasquez of Casper, Wyoming; two daughters, Christina Duran and her husband Albert and Rebecca Orozco all of Las Cruces; one brother: Abraham Vasquez; two sisters: Catalina Ortega and Amelia Vasquez. Other survivors include seven grandchildren, Thomas Altamirano, Jenelle Altamirano, Larissa Duran, Erica Duran, Joseph Orozco, Quintin Vasquez, and Xavier Vasquez, as well as numerous nieces, nephews, and cousins. Angel was preceded in death by his parents, his wife, Aurora Vasquez on January 28, 1997; his brothers Tomas, Felix, Jesus and Humberto Vasquez; a sister, Helen Vasquez-Goodwin.
Serving as pall bearers will be Abraham Vasquez, David Vasquez, Stephen Vasquez, Albert Duran, Thomas Altamirano and Joseph Orozco.
Visitation for Angel will be held Thursday, January 10, 2019 from 6:00 p.m. to 7:00 p.m. at Getz Funeral Home Chapel, 1410 E. Bowman Ave. Las Cruces, NM, where the prayer vigil will follow at 7:00 p.m. A Funeral Service will begin at 10:00 a.m. on Friday, January 11, 2019 at St. Genevieve’s Catholic Church at 100 S. Espina St. The Rite of Committal and burial will follow at St. Joseph’s Cemetery.
Arrangements with Getz Funeral Home, 1410 E. Bowman Ave. Las Cruces, NM 88001. Please visit www.GetzCares.com to sign the local online guest book.

To send flowers to the family or plant a tree in memory of Angel S. Vasquez, please visit our Heartfelt Sympathies Store.