In Memory of
Josephine
Marrufo
1937 - 2020
Click above to light a memorial candle. 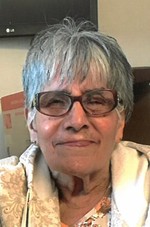 Josephine Parra Marrufo was born on an Easter Sunday, March 28, 1937. She made her grand entrance in Deming, New Mexico born to Elvira and Manuel Parra where she would live for many years on the infamous Ruby Street. She proudly declared herself to be a tomboy who was full of life and loved to hunt, hike and explore the southwest.

A beau by the name of Jose (Joe) Marrufo caught her attention. They were married and a few years later their daughter, Elizabeth arrived. Shortly after the birth, they moved to California where Joe took a job in Whittier.

After a short time in California, Joe was accepted into the New Mexico State Police Academy. They returned to the state they so loved. Diane, their second daughter was born in Las Cruces, New Mexico where they lived while Joe completed his police academy requirements in Glorieta, NM. After he graduated he was assigned to the Farmington district.

The family was small and they were surrounded with many friends who welcomed them into the community. After three years in Farmington, Joe, a son was born. The family then moved to the Navajo reservation in Shiprock, New Mexico where they lived for five years. The time spent with the Navajos were some of the best memories they ever had. Josephine was an educator who worked with pre-school aged children. Her devotion to their education was bar none.

Josephine was a devoted parishioner at Christ the King Catholic Church in Shiprock. She was a proud sponsor of the high school student group known as the Catholic Youth Organization (CYO). She would often take the students to other parishes on the reservation for retreats and conferences. After five years in Shiprock, Joe was transferred to Anthony. The family was sad to leave the Navajo reservation where they had developed friendships that to this day are still intact. After living in Anthony, New Mexico for four years, the twins, Jamie and Jackie came along having been born in El Paso, Texas.

There was no job that Josephine couldn’t do. She cared for her grandchildren, drove a bus, educated children, served as a substitute teacher, coached a soccer team, played sports but most of all she inspired a great family.

Services will be held on Thursday, April 23, 2020 beginning at 9:30 am at St. Albert the Great Newman Center. Interment will follow at Mountain View Cemetery in Deming, New Mexico.

The family wishes to extend their gratitude to the following people who helped their mother during her journey with Parkinson’s Disease; Dr. Roberto Duran, Dr. Naveed Iqbal, Good Samaritan staff, Mesilla Valley Hospice staff, private caregivers, St. Albert the Great eucharistic ministers, extended family and friends who were all an important part of her life.

Due to COVID-19, restrictions have been placed and limitations on capacity of attendance will be restricted, this will be a private and not open to the public. Getz Funeral Home will be live streaming services at Getzcares.com as well as Facebook for additional family, friends, and the public to attend.

To send flowers to the family or plant a tree in memory of Josephine Marrufo, please visit our Heartfelt Sympathies Store.