In Memory of
Dolores Volkmer
Wallace (Wright)
1931 - 2020
Click above to light a memorial candle.
Memorial Candle Tribute From
Getz Funeral Home
"We are honored to provide this Book of Memories to the family."
View full message >>>
Send Flowers
Menu 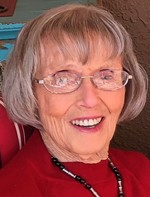 On Thursday, October 8th, 2020, Dolores Volkmer Wallace, loving wife and mother of four sons passed away in Las Cruces, New Mexico. She was 89 years old.
Dolores was born on June 15th, 1931 in Nemaha County, Nebraska, to Eddie and Gleeola Wright. Dolores was born and raised in the farming life of southeastern Nebraska. She was a country schoolteacher at 19 and married shortly thereafter. On June 15, 1950, she married Harold Gilbert Volkmer and had four sons, Scott, Brad, Kent, and Blane. Harold passed away in 1999, and Dolores remarried Joe Wallace on April 18, 2001.
She was an outdoors person; a fitting trait as she raised four boys in all kinds of sports. She loved music and was a talented pianist. She loved to play cards and was deceptively intense and usually won; then it was “aw shucks”.
Dolores was fortunate to find two loves of her life. With Harold she had her four sons, and grew from the farm to the city where they owned and operated the Arcade Shoe Store for 33 years. She loved to dance and spent many nights on the back porch or at dances with Harold. She met Joe at a drivers ed class and they never drove alone again. Joe and Dolores had a special gift for supporting each other through the golden years into the twilight; never one without the other. She was a true and devoted wife and partner to both her husbands.
She is survived by her husband Joe, her four children, Scott, Brad, Kent, and Blane, eight grandchildren, and fifteen great grandchildren.
Dolores was preceded in death by her father, Eddie, and her mother, Gleeola, and her first husband Harold.
A memorial service will be held on Thursday, October 22nd, 2020 at the St. Albert the Great Newman Center 2615 South Solano Drive Las Cruces, NM 88001 at 9:00 a.m. for the rosary followed by a mass. In lieu of flowers, donations may be sent to Mesilla Valley Hospice, Inc, 299 East Montana Ave, Las Cruces, NM, 88005.
Arrangements by Getz Funeral Home, 1410 E. Bowman Ave. Las Cruces, NM 88001. Please visit www.getzcares.com to sign the online guest book.

To send flowers to the family or plant a tree in memory of Dolores Volkmer Wallace (Wright), please visit our Heartfelt Sympathies Store.