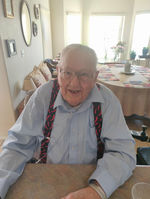 Robert “Bob” L. Sanders passed from this life to his eternal home on June 25, 2022 at Three Crosses Regional Hospital in Las Cruces, New Mexico, surrounded by his children. He was 86 years, 9 months, and 24 days old.
Bob was born to Frank and Daisy Sanders on September 9, 1935 in Southwest Missouri. His father was a Baptist Preacher. He had one brother, Bert, and one sister Sharlene Herndon, both deceased. He is preceded in death by his wife, Mary Ellen Sanders. He is survived by his two children: Michael Sanders (daughter-in-law Shelly Sanders) and Michelle Hillen (fiancé Hector Perez), both of Las Cruces; five grandchildren: Cariel Apodaca (husband David), Kyrsti Kinders (husband Tony), Anthony Hillen, Bryan Hillen, and Connor Sanders; and three great-grandchildren: Rachael Medina-Sanders, David Michael Apodaca, and Gwendolyn Kinders.
Bob graduated from Vinita High School in Vinita, OK; Tulsa Barber College in Tulsa, OK; Oklahoma Baptist University in Shawnee, OK; and American School of Piano Technology in CA.
At 10 years old, Bob was saved while attending a church camp at Bennett Springs in Missouri. He surrendered to full-time ministry while attending another church camp on Monkey Island in NE Oklahoma at the age of 14. He surrendered to the Music and Religious Education Ministry while in service with the US Army. His military duties took him to Germany, where he served from 1954-1956. He was ordained on May 28, 1967.
On October 5, 1956, he married Mary Ellen Freemyer in Tulsa, OK. They were married for 58 years, until her death on September 12, 2014.
Bob and Mary Ellen served several churches in OK, MO, and AZ. Bob also served as Director of Religious Education at Fort Sill, OK. Bob was also a renowned piano technician/tuner, preparing pianos for artists like Ronnie Milsap, Ferrante & Teicher, Anita Bryant, and many others. He retired in 2004 and moved to Las Cruces, NM to be near his son, Michael and his family.
Bob was a charter member of the Singing Churchmen of Oklahoma. His choirs sang for the meeting of the Oklahoma Baptist Convention sessions, Missouri Baptist State Convention, Arizona Baptist Convention sessions, and various civic organizations. He was featured soloist for the Missouri Baptist State Convention meeting in Kansas City in 1962. While serving the Forest Park Baptist Church in Joplin, he started the first Senior Adult Choir in the state of MO.
In 2019, Bob joined the East Mesa Baptist Church in Las Cruces and served in various capacities.
His family will remember his humor; his love of OU (BOOMER SOONER!) football and women’s softball; his fondness for baseball, particularly the AZ Diamondbacks; his loyalty to the Dallas Cowboys; and his deep appreciation for classic Western movies.
Visitation for Bob will be held on Wednesday, June 29, 2022 from 5-6 PM at Getz Funeral Home (1410 E. Bowman Ave; Las Cruces, NM). A memorial service will be held at 2 PM on Thursday, June 30, 2022 at East Mesa Baptist Church (6160 Moongate; Las Cruces, NM), officiated by Rev. James Pratt. A reception at the church will immediately follow the service. Interment will be held at Fort Bliss National Cemetery at a later date.
In lieu of flowers, donations may be made in Bob’s honor to The Gideons International (www.gideons.org/donate).

To send flowers to the family or plant a tree in memory of Robert Loyd "Bob" Sanders, please visit our Heartfelt Sympathies Store.