To share your memory on the wall of Ola Lievsay, sign in using one of the following options:

Ola is survived by her son, Gene Lievsay and wife Judy of Maricopa, Arizona, her daughter Cindy Horton and husband Glen of Las Cruces, New Mexico, her son Richard Lievsay and wife Relita of Alton, Missouri, and her daughter in law Orchid Lievsay of Phoenix, Arizona. She is preceded in death by her husband, Lee, son Homer, daughter Ruby Sumner and son in law Jim Sumner.

The immediate family will have a graveside service at Hillcrest cemetery on Tuesday June 16 at 9:30 am with a drive through parade of love and thoughts at the cemetery open to friends at 9:50 am. An online memorial will be posted at a later date.

The family wishes to express gratitude to the staff and caregivers at Aristocrat Assisted Living for 8 years and Mesilla Valley Hospice for excellent care of Ola during her last few days.
Read Less

To send flowers to the family or plant a tree in memory of Ola M Lievsay, please visit our Heartfelt Sympathies Store.

We encourage you to share your most beloved memories of Ola here, so that the family and other loved ones can always see it. You can upload cherished photographs, or share your favorite stories, and can even comment on those shared by others. 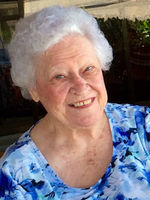