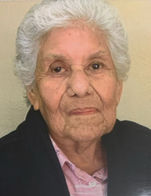 In Memory of
Lorenza
Benavidez (Ruiz)
1929 - 2021
Click above to light a memorial candle.
Memorial Candle Tribute From
Getz Funeral Home
"We are honored to provide this Book of Memories to the family."
View full message >>>
Send Flowers
Menu 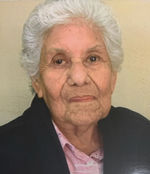 Lorenza R. Benavidez of Chamberino, NM, beloved mother and grandmother, went home to be with the Lord on Friday, May 28, 2021. She passed away at home at the age of 91. Lorenza was born on July 7, 1929 in Barstow, Texas to Manuel Ruiz and Josefa Evaro Ruiz.

Lorenza had many happy memories of her early childhood in Barstow, Texas. She lost her mother at the age of seven and later moved with her father and three sisters to Nevada and California. She eventually settled in Chamberino, NM where she met her future husband, Antonio Benavidez. Lorenza was a lifelong homemaker and mother to eleven children.

Lorenza enjoyed receiving company, delighted in music and loved colorful flowers. Her dog, Rusty, of eleven years was her loyal and constant companion and the joy of her later years.

Public Visitation will take place June 2, 2021, at Getz Funeral Home starting at 5:30 pm. Following the Visitation, a Rosary will be held at 7:00 pm. A Funeral Mass will take place the following morning June 3, 2021 at the San Luis Rey Catholic Church in Chamberino, NM at 10:00 am. Burial will take place after at Chamberino Cemetery.

To send flowers to the family or plant a tree in memory of Lorenza Benavidez (Ruiz), please visit our Heartfelt Sympathies Store.