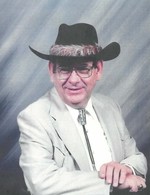 After being injured on the job more that 30 years age, with that injury developing into RSD (Reflex Sympathetic Dystrophy). RSD is a nerve disorder that is not able to be treated or cured but develops into increasing pain, more so if you do not believe in taking pain meds and that was a big NO, NO. In Larry’s case it moved throughout the complete nervous system. He has been cared for by his second wife, Diana. The last few years has been very difficult, but her loving hands and kind heart made the increased pain more tolerable.

Larry was born to John William Allen and Rosa Mae Boyce Allen three miles outside of Hagerman, New Mexico, on the Allen Family farm. Born with serious medical conditions that made the local doctor tell the family “care for him, protect him, love him for he will not be with you long.” Larry’s sibling one brother, Herbert Lee Allen (Deceased) and two sisters Doris Louise Foreman (deceased), and Vesta Almeda Dion (deceased) followed the doctor’s orders to the tee. Larry’s youth was difficult but his older siblings too good care of him. At school even when the bullies called =him crippled, because his body on the right side was disabled, they would arrive at his side, with “fists drawn” to protect their little brother, which they did often. He was always grateful for the love of his immediate and extended family, for it took many villages to get him through his childhood which included being one of the first patients at Tingly Children’s Hospital at Hot Springs (T or C), New Mexico. By the time he grew to be a teenager he was able to do much more that anyone thought would be possible, he welcomed a younger brother into the home and did a lot of afterschool care. William Duane Allen (Deceased) was always a joy for Larry but like all siblings they had their differences, the Love and Concern for each other was always a high point in their relationship that has grown over the many years.

Larry’s first wish was to be a civil engineer but because of his disabilities he was not able to accomplish his wishes but with great wisdom from many teachers he was guided into his professional career of accounting. He worked for many accounting firms and owned his own bookkeeping/tax service. He received council from a family friend, Brother J. Wayne Whitworth, to returned for more education to help provide for his growing family and after a few years he graduated from NMSU with a degree in accounting.

During the period of providing for himself he had met a wonderful young lady that he would call “his bride” for the rest of their marriage. Sara Joline Pierson saw something special in her future husband. They would in time bring 4 children into this world: Sara Marthell Waggoner (Dennis), Debra Joy Efert (Michael), Larry Neil Allen Jr. (Cheryl), Judith Kathleen Feurbach (Steven). The additional education not only helped to provide for his growing family, but it helped him to advance in his professional career, with an opportunity for work within the federal government that gave the security of medical benefits that would help for many years in the future.

A few years after his first wife’s death in 1983, he found himself working at Ft. Irwin, near Barstow, California. The local Bishop of the Church of Jesus Christ of Latter-day Saint thought it would be a good idea for Larry to attend the Sweet-Heart Dance on the February 14, 1986, a date arranged with a lady that had just moved into the area from Atlanta Georgia. Not known by anyone, but maybe Bishop and the LORD this was the person that was to be Larry’s second wife. Diana Joyce McKenzie Brazel said “I Do” about 6 weeks after their first date. Into this union, six additional older stepchildren, Patricia Ann Guay (deceased), Michelle LaRue Pope (Jeffery), William Louis Brazel, Lawrence Joseph Brazel, James Raymond Brazel, Tina Marie Brazel (deceased). Larry welcomed them unconditionally with a father’s love, as part of his extended family.

Many experiences over the 80 plus years of life but the highlight of them all was the growth in his personal testimony of Our Savior and Our Father in Heaven. Larry served the master through many callings within the Church of Jesus Christ of Latter-day Saints. Until the day he died it was his honor to hold and serve within the Priesthood, entrusted unto him by Christ, his “Elder Spiritual Brother” Even with the physical pains of life, Larry always had the faith that his father in heave would give him strength to endure faithfully until the end. His humor brought him through much of his pain and the support of his “church family” over many years is too great to express, for they gave him and his beloved 2nd bride, Diana, “Thank You”.

Many loved once has now welcomed him with hugs on the other side of the veil, including his 6th great grandfather Aaron Brock Sr. “Chief Red Bird” (Cherokee name Tsalagi-Ugrwiyuhi Totsu’hwa) the Indian connection was found after many years of family history research. Great joy came the day Larry was able to prove the family folklore was correct “we are part of American Indian” of Jewish decent.

Larry is now waiting on the other side of the heavenly veil, called death, for all those hugs that he could not except, because of pain, from his family and friends during his “earthly life”. He knew that death is not the end but just the beginning of another step through eternity.

GOD BE WITH YOU, UNTIL WE MEET AGAIN.

A viewing will be held from 6-7 pm on Tuesday March 23, 2021 at Getz Funeral Home. With music sung by Larry’s #1 singer, Ray Price, in background. All services under the direction of Bishop Nate Olsen of the Church of Jesus Christ of Latter-day saint, Dona Ana Ward. A graveside service will be held at 2:00 pm on Thursday, March 25, 2021 at South Park Cemetery in Roswell, NM.